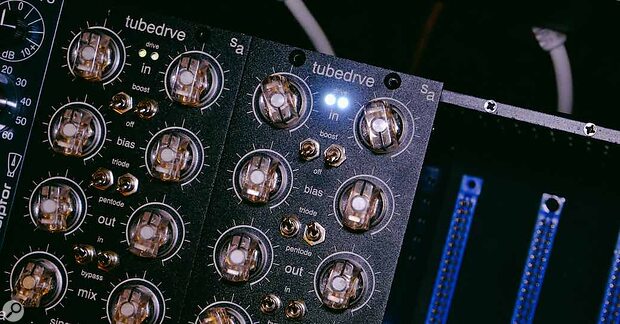 Singular Audio have announced the release of the Tubedrve, a 500-Series stereo valve saturation processor. Employing four valves in its circuitry, the unit offers pentode and triode operation modes, providing a smooth sounding overdrive made up of predominantly even harmonics, as well as more aggressive distortion containing mostly odd harmonics.

A pair of Input controls allow users to set the level of the audio signal being sent to the valves, and each channel is equipped with a Boost switch capable of providing an additional 15dB of gain to obtain more extreme overdriven sounds. The bias current for each channel can be controlled via a Bias knob, which introduces asymmetrical waveform clipping at its highest and lowest settings, resulting in a more aggressive tone. The device’s triode and pentode modes are also individually selectable on each channel. 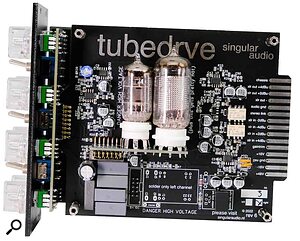 The Tubedrve uses New Old Stock EF86 and 6AS6 valves, and offers both triode and pentode operation modes.Two Out controls provide post-valve level controls, and each channel is also equipped with a Mix knob, which provides a wet/dry balance control to allow for parallel processing. Singular Audio say this is a useful feature as it allows the user to restore some of the dynamics that can be lost due to the compression introduced by more extreme distortion settings.

A pair of white LEDs provide a visual indication of the amount of overdrive being applied, and each channel features a bypass switch, which utilises relays to remove the saturation circuitry from the module’s signal path entirely. The Tubedrve uses NOS (New Old Stock) EF86 and 6AS6 valves, and utilises a DC-DC converter to generate a plate voltage of 240VDC.

The Tubedrve is available now, and is being currently (5 December 2022) being offered for an introductory price of €699, compared to its full price of €799.