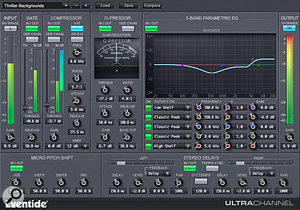 Most unusually, Eventide are making UltraChannel available as free download until midnight on July 8th, 2014. To claim your freebie, go to http://bit.ly/UltraChannel and copy and paste this Access Code: 0AA225EC. After the promo ends, UItraChannel native will cost $249.

The plug-in features a pair of dynamics processors: the O-Pressor, taken from the Omnipressor, which is capable of extreme compression, and a conventional compressor with de-essing and side-chain capability.

UltraChannel also offers soft-saturation, and transformer emulation which recreates transformer core saturation. Eventide describe this as adding harmonics to low frequency material while remaining relatively transparent to the rest of signal. The transformer emulation is intended to bring life to otherwise dull mixes and help glue disparate sound sources together.