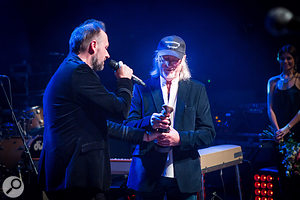 Roger Glover of Deep Purple receives his Man With The Golden Ear award at SoundEdit 2015
Arguably the cultural capital of Poland, the beautiful city of Lodz is home to many of the nation’s creative businesses, and has a long history of film-making. It also hosts SoundEdit, an annual event billed as the world’s only Festival of Music Production. Now into its seventh year, the festival combines workshops and seminars with high-profile live performances and the unique Man Wth The Golden Ear awards. Past events have featured star guests such as Daniel Lanois, Karl Bartos, John Cale, and this year’s SoundEdit, held from October 23-25, honoured two legends of British music who have exerted huge influence in their own spheres.

Roger Glover is perhaps best known as the bass player in Deep Purple and Rainbow, but also produced a string of classic hard rock and metal albums in the ’70s and early ’80s, by acts including Rory Gallagher, David Coverdale, Nazareth and Judas Priest. Flying into Lodz in advance of Deep Purple’s concert in the city, he not only accepted an award but gave frank and often very funny answers to questions put to him by SoundEdit attendees in a Q&A.

Saturday night headliner at the festival itself, meanwhile, was Sir Bob Geldof, singer in the Boomtown Rats and the driving force behind Live Aid. His impassioned live set showed that he is stlil a musical force to be reckoned with, but perhaps the highlight of the event was the previous night’s headline slot by Liverpudlian legends of electronic music, OMD. SoundEdit organiser Maciej Werk also orchestrated several unique collaborations between well-known Polish musicians, including a memorable screening of Fritz Lang’s silent movie Metropolis with live electronic music by Agnieszka Makówka, Igor Gwadera and Władysław Komendarek.

Exciting and ambitious developments are already being mooted for next year’s SoundEdit; and with cheap flights available from London Stansted and lots to see and do in Lodz itself, it’s the perfect short break for British SOS readers!

The A-Z Of Audio Interfaces
4 weeks 19 hours ago.