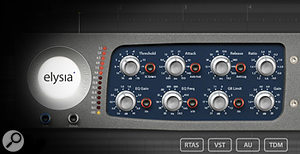 Elysia have released a plug-in recreation of their Mpressor 'creative compressor' unit in RTAS, VST and Audio Units formats (TDM format will be available in December).
The Mpressor was reviewed in its hardware form in SOS August 2008, and was praised for its clarity and versatility, with its only downfall being a relatively high price tag. In an effort to bring their sound to the masses, Elysia have employed DSP specialists Brainworx to model the discrete circuitry of the original unit along with all of its controls.
The Mpressor deviates from standard compressor behaviour with the inclusion of negative ratios, Anti Log release (designed to enhance the pumping effect of volume reduction), and a separate Gain Reduction Limiter knob, which allows the user to fine-tune gain reduction independent of threshold and ratio values.

The Mpressor plug-in is available now from the Elysia web site and costs E261 until November 30th, after which date the price will rise to E349.
www.elysia.com
Previous storyNext story