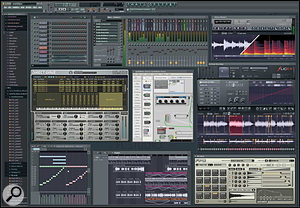 An update to Image Line’s popular FL Studio DAW has been released, bringing with it new plug-ins and work-flow alterations, and a bizarre new instrument called Autogun. A psuedo-random additive synth based on the sound engine from Image Line’s Ogun synth, it uses more than 32,000 harmonics to create metallic sounds, but has only a few controls. Autogun contains four billion presets that appear have been created by assigning a number to nearly every possibility, which can paged through or selected by typing in by number. The Vocodex vocoder and the Stereo Shaper Mid/Side processor are also new to FL Studio 9 (FL9), as is the side-chaining function of the Fruity Limiter. FL Studio Signature Edition has replaced the old XXL bundle for the v9 release, and gives the user the full-featured Producer Edition of FL Studio as well as six plug-ins, including the Maximus mastering limiter and Hardcore, a stomp-box emulator for guitar.

Users of multi-output plug-ins (such as NI Kontakt 4 or Toontrack Superior Drummer 2) will be happy to know that unlike, unlike FL8, FL9 supports more than two outputs via the Fruity Wrapper channel, which handles virtual instruments in FL. The mixer has also been enhanced, now boasting 105 tracks, while the playlist has gained a scrub function, among others. Arrangement in FL9 (as in v8) can be carried out in a visual, hands-on way, without specific mixer tracks being tied to a playlist track. In order to make the stacking of different types of clips on top of one another user friendly, a prioritisation system has been added, letting the user give top editing priority to audio, automation or pattern clips at any one location. Also new to the playlist is a miniature play button, which has found its way onto the step sequencer as well. Finally, Image Line have tidied up multi-core support for FL9, allowing plug-ins in the mixer to take full advantage of the latest processors by multi-threading tasks, where previously only instruments could use more than one core.

Purchasing FL9 on-line will give you the right to a lifetime of full, free updates for that package, meaning that if you like the software, you’ll never have to pay for another DAW again. Prices range from $49 (currently £29) for the stripped-down Express Edition, to £299 (currently £179) for the Signature Edition, containing the widest range instruments and effects. The Producer Edition, which is fully featured, but does not include the extra effects and instruments, costs $199 (currently £119).