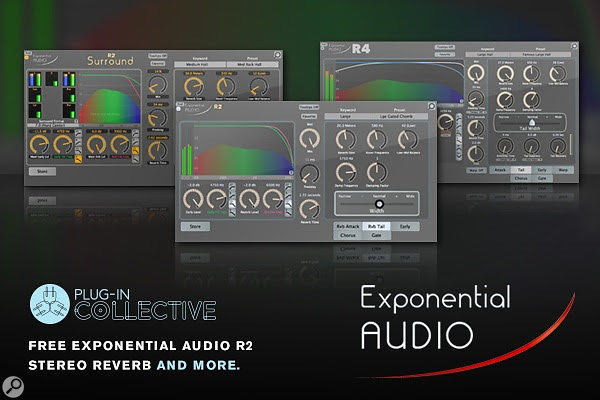 Worth $239, the Exponential Audio R2 stereo reverb plug-in is free for Focusrite hardware customers (iLok 2 or iLok 3 required) in this month's Plug-in Collective offer. Those who register Focusrite hardware before 1 May 2017 — or those who have already registered — receive the plug-in by signing in to their Focusrite accounts.

What’s more, when Focusrite customers redeem their R2 license, they will become eligible for 40% off R2 Surround and 50% off Exponential Audio R4.

R2 is one of the first and most popular Exponential Audio plug-ins. It has been an essential part of countless music mixes as well as films and broadcasts. The plug-in is known as a character reverb capable of adding warmth and fatness to mixes that might otherwise be sterile.

Helpfully, R2 is also one of the most processor efficient plug-ins on the market and requires no DSP card. The CPU load of a single copy is virtually invisible, it is claimed. Part of the trick here is that it shuts itself off when the track is idle, increasing its efficiency even more.

R2 Surround is an expanded version of R2, featuring additional control over early reflections and a native channel count of up to 7.1. "The R2 Surround has become a staple in my template,” says music scoring mixer Alan Myerson (Gladiator, Dunkirk, Interstellar, Wonder Woman, Kong: Skull Island). “It's my go-to percussion reverb and finds its way on my orchestra a lot. I haven't done a mix without it since I first got it.”