Published 20/5/08
And much more from Native Instruments 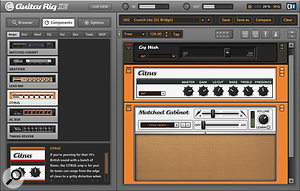 Native Instruments have announced a new, stripped-down version of Guitar Rig 3, their guitar amplifier- and cabinet-modelling plug-in. It’s called Guitar Rig 3 XE, and it has the same Dynamic Tube Response technology that NI say give the plug-in its “enormous tweakability”.

The XE version has five amplifier models, 12 cabinet types and 21 different effects modules, plus a tuner and a metronome, all of which are displayed on the same ‘virtual rack’ Graphical User Interface (GUI) as the full-fat version of Guitar Rig. Of course, it’s not just for guitars; Guitar Rig 3 XE can be used on bass and vocals, for example, for everything from subtle thickening to aggressive distortion. It’s available now, costing £85. 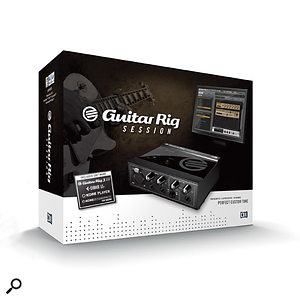 Alternatively, the plug-in can be purchased as part of the new Guitar Rig Session bundle, which also includes Cubase LE4, Kore Player, the Pop Drums Soundpack and Session I/O, a brand new USB 2 audio interface. Session I/O is a simple device with two-channels of input and output, which can accept mic, line or instrument input signals. Outputs are on quarter-inch jack, and there’s a headphone output with its own volume control. All the components of Guitar Rig Session are compatible with Mac and PC, and it’s shipping now, at a cost of £199.

Also new from Native Instruments is Kontakt Retro Machines, a content library (called a Korepack) that can be used on Kore, NI’s hardware controller and software hosting platform, and also in Kore Player, which is available free of charge.

The audio content in Kontakt Retro Machines is based on material found in the Kontakt 3 factory library, and comprises samples from 16 vintage hardware synthesizers and six classic drum machines. There are over 130 Koresounds that each have a dedicated sample set and, as standard with the Kore format, each have eight tonal variations.

Kontakt Retro Machines is available directly from the NI web shop, costing 49 Euros, which was just under £40 when we went to press.