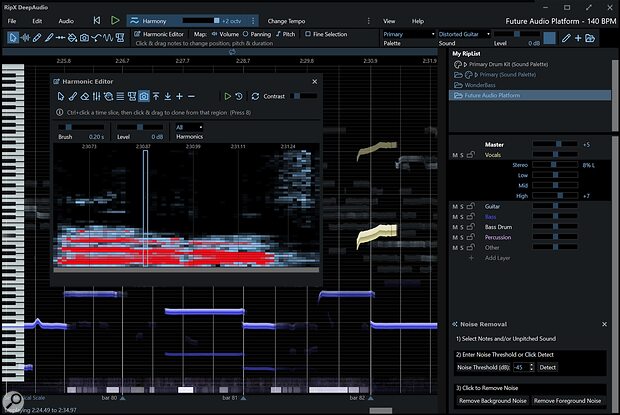 Infinity, the powerful audio editing and de-mixing software from Hit'n'Mix, has just been given a major update. Dubbed RipX: Deep Audio, the update is free to existing Infinity users and is said to provide significantly improved audio separation compared with previous versions.

RipX performs its audio alchemy of isolating individual instruments within a stereo mix using a combination of AI machine learning and algorithmic processing. But, while it is capable of 'un-mixing' a complex track, it also allows you to perform subtler, though no less useful tasks. For example, it can isolate sibilants in a vocal recording, meaning you can use it as a sort of surgical de-esser even in a track that's already been mixed. And it can even tune lead vocals without you needed to go back to the original multitracks — a feat made even new easier in the latest version of Infinity, which adds an automatic Pitch To Scale mode.

Other improvements include faster ripping speed (ripping is the process of analysing a track prior to processing and deconstruction), improved stem import/export options, and the ability to export to Native Instruments' own Stems format. As you might expect from a major update, numerous other enhancements have been made to the user interface too, all in the name of streamlining your workflow.

When we reviewed the first version of Infinity back in January last year, we found it capable of some extraordinary feats, but it's not just about deconstructing mixes: it's also capable of performing sound design techniques that you likely won't find anywhere else. That review provides a good overview of Infinity's general functionality, and you can read it here, or for a quick run-through of what it's capable of, check out the video below.