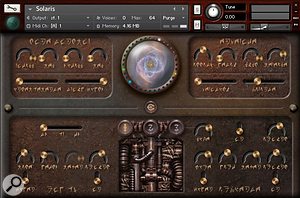 The second is a new sound design instrument or 'texture synthesizer' called 'Sounds of the Universe'. This Kontakt instrument aims to recreate the sounds of space, as captured by NASA probes, using modular synthesizers.

Each sound in the SOTU instrument features up to four channels of audio: a low frequency element, some mid range content, then a combination of high frequency blips, beeps, chatter, crackle or swirling sounds.

SOTU only costs £15 and audio examples can be heard at the Hollow Sun website.