Sample Logic blows the DAWs off Skip to main content

Sample Logic blows the DAWs off 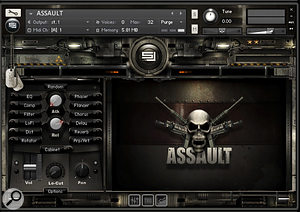 Sample Logic Assault screenshotAre you looking for an extensive library of explosive military sound effects without the danger of serious injury?

Instruments are organised into several categories including arpeggiated, combos, impacts, interrupters, reverses, rises-falls, scrapes, sweeps and quick kits. Sample Logic are rather proud of their 'mulit script macro' feature which allows six macro knobs to be assigned to any combination of instrument parameters within a multi.

Although Assault launches officially on February 25th with a MSRP of $299, there is a discount for pre-orders bringing the cost down to $199. For more information, see the Sample Logic website.