IK Multimedia have announced the release of the iLoud Precision series, a new range of DSP-equipped studio monitors which the company say offer a level of sonic detail that rivals speakers costing three times the price.

The series sees the introduction of three new models to IK Multimedia’s range, each of which will ship complete with a MEMS measurement microphone to utilise on-board acoustic calibration features which are based on the company’s ARC System technology. Versions equipped with 5-inch and 6.5-inch drivers paired with a 1.5-inch tweeter are available in the form of the Precision 5 and Precision 6, with a larger Precision MTM model utilising the same tweeter placed alongside dual 5-inch drivers.

Each of the models within the range feature internal DSP processing, and the pairing of a digital crossover and custom Class-D amplifier units allow the monitors to deliver a true linear phase response above 150Hz, enabling precise stereo imaging and clear, detailed transients. Frequency response for each model is specified as being within ±1dB from 45Hz and upwards, and time coherence between the driver and tweeter also benefits from the DSP, with IK Multimedia stating that the series offers the highest level of time accuracy without sacrificing frequency response.

All iLoud Precision models also feature a range of low and high-frequency management options, including a switchable Full Range, 35, 50, 65, and 80 Hz high-pass filter, designed to optimise their performance when being used as part of surround or immersive audio monitoring setups. 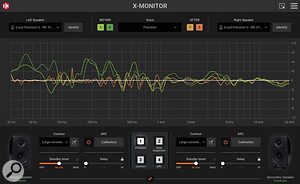 In addition to assisting with the calibration process, the X-MONITOR software provides access to each speakers rear panel controls and speaker emulation options.In addition to the new hardware, the Precision series also sees the introduction of X-MONITOR, a unique and advanced control application for both Mac and Windows systems which assists with the calibration process. The software connects to the Precision series units via USB, and also provides convenient remote access to each speaker’s rear panel controls.

As well as the calibration functionality, X-MONITOR also allows iLoud Precision models to emulate both the phase and frequency response of other classic studio monitors and Hi-Fi speakers, effectively allowing users to quickly carry out A/B comparisons on a variety of reference systems. Over 20 monitor profiles are currently included, and IK Multimedia say that more will become available in future updates. 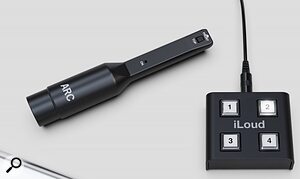 Each system is supplied with a measurement microphone for calibration, whilst an optional remote control provides hardware control over a variety of speaker and monitoring functions.A measurement microphone is included with the purchase of any Precision series system, allowing users to carry out the calibration process without the requirement of any additional equipment. Each model also comes supplied with a set of iLoud Isolation Pods. Placed between the speaker cabinet and supporting surface, the pods have been designed to dramatically reduce the propagation of vibrations.

An optional iLoud Precision Remote Control is also available, providing the user with hardware buttons which can be programmed to switch between speaker emulations, or assigned to functions such as ARC On/Off, Mute, or Dim. The remote also works with ARC to control the measurement and calibration process whilst providing visual feedback on the calibration status and monitor settings.

Each of the iLoud Precision models is available to order now directly from IK Multimedia, or via authorised dealers worldwide. X-MONITOR software will be available in October. Pricing is as follows: