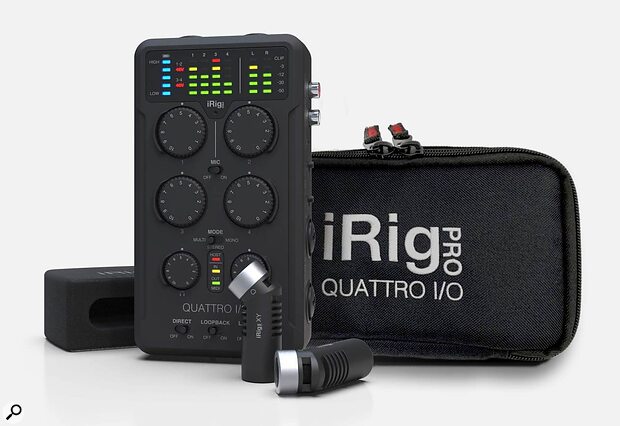 IK Multimedia have released the iRig Pro Quattro I/O, a compact audio interface and mixer designed for field recording, featuring four audio inputs, two audio outputs, a built in omnidirectional microphone and MIDI I/O. A deluxe bundle including a custom pair of iRig microphone capsules in an X-Y arrangement is also available, allowing users to capture stereo recordings without any additional microphones. As with other products in the iRig range, the device is compatible with iPhone, iPad and Android devices, making it possible to put together an incredibly portable recording system. On top of functioning as a 24-bit, 96kHz audio interface, the iRig Pro Quattro I/O can also be used as a standalone preamp and line mixer.

The unit boasts an array of connectivity, with the first two channels offering microphone or instrument inputs via XLR/TRS combo sockets, whilst another two combo sockets for inputs three and four accept either microphone or line-level sources. Additional means of connecting line-level sources to channels three and four are provided in the form of a stereo mini-jack input, and a pair of RCA sockets. 48V phantom power is available for all four microphone inputs, and is switchable in pairs. The two line-level outputs are also available on both XLR and mini-jack outputs, and MIDI connectivity is provided on two 2.5mm TRS sockets (with an adapter cable included). Finally, another mini-jack connector allows headphones to be connected for monitoring purposes, equipped with its own independant volume control. 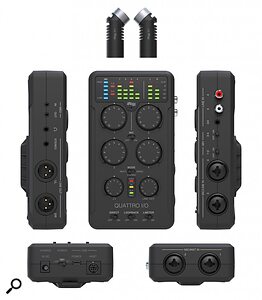 Various operation modes are available depending on the task at hand, each with some useful functionality on offer. A Stereo mode mixes all of the input sources to a final stereo output which can then be sent to streaming apps, or connected to external devices such as a PA system or DSLR camera. A Mono mode also provides summing of input sources, but this time to a single mono output to allow compatibility with situations that require a mono feed, streaming to some social media platforms, for example. A third mode, Multichannel, simply routes the four inputs to four corresponding outputs allowing the device to behave as a traditional four input audio interface when connected to a computer or mobile device.

A built-in limiter helps to avoid clipping on the first two input channels, and when operating in Stereo or Mono modes, the remaining pair of inputs can be used as ‘safety’ channels. With this feature enabled, inputs three and four will record the same signal as inputs one and two but with the level reduced by 12dB as a backup in case of unexpected overloads. The iRig Pro Quattro I/O also includes Loopback+, which allows input signals from channel three or four (or both) to be sent to audio apps such as AmpliTube, or VocaLive for processing, and then back to the first pair of inputs to be routed on according to the user's needs. Power can be provided via USB, 4 AA batteries, or an external PSU.

IK Multimedia are also including a bundle of software for Mac, PC and mobile platforms with the purchase of an iRig Pro Quattro I/O, full details of which are available on the product page at IK Multimedia’s website.