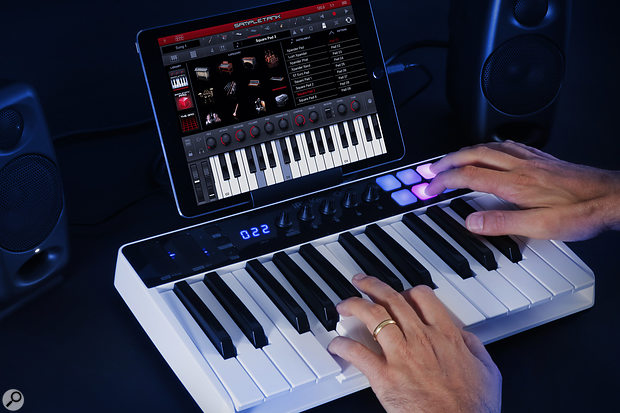 Designed for mobile use with iOS devices as well as studio use with Macs and PCs, IK Multimedia’s new controller range aims to provide everything you need to turn a tablet or laptop into a music production station in one light, low-profile package. Available with 25 or 49 keys, the iRig Keys I/O controllers also house a 24-bit/96kHz audio interface, a Class-A mic preamp with phantom power, balanced line inputs and outputs and an impressive bundle of included software. 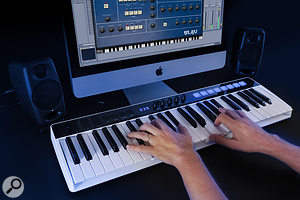 The new controller/interface range includes both 25- and 49-key modelsIK are claiming that these keyboards are both 25 percent lighter than their nearest competitor and the smallest controllers on the market to still feature full-size keys. Above the synth-action keybed, you get eight velocity-sensitive pads lit by multicoloured LEDs, four rotary encoders that access eight parameters arranged in two banks, a volume/data push-button rotary encoder, transport controls and two touch strips set to pitch and modulation by default but fully programmable. All of these controls use capacitive technology, meaning that they are touch-sensitive and, according to IK, extremely quick to respond. Connecting via Lightning cable or USB, the iRig Keys I/O controllers can be powered by four AA batteries, by the USB bus or by an optional external mains adaptor, which will also charge any connected iOS devices. Other connections include the combi XLR/quarter-inch mic/line input, a high-impedance instrument input, balanced stereo line outs on TRS jacks and a mini-jack headphone output.

As for the included software, with many controllers this can feel like an afterthought, but for the iRig Keys I/O range, the prodigious bundle of included IK Multimedia instruments and effects is really a core component of the product. It includes the Sampletank 3 sound and groove workstation featuring 5,000 instruments and 43GB of sounds, Sampletank for iPhone and iPad, the T-RackS 4 Deluxe mix and mastering plug-in suite and the Syntronik Pro-V virtual synth. The 49-key controller also comes with the Miroslav Philharmonik 2 CE orchestral instrument, while Ableton Live 9 Lite is included with both models. The iRig Keys I/O controllers will be available from October, priced at 199.99 Euros$199.99 for the 25-key version and 299.99 Euros$299.99 for the 49-key version.