Some things, important though they may be, just aren’t very exciting. Patchbays, for example, or mic stands, don’t exactly get people excited in quite the same way as boutique outboard gear or large-format mixers. Nonetheless, when such essential (if unglamorous) pieces of studio equipment get revised in a useful and practical way, it’s worth a mention in SOS, and so it is with PACE’s new and improved iLok USB Smart Key. 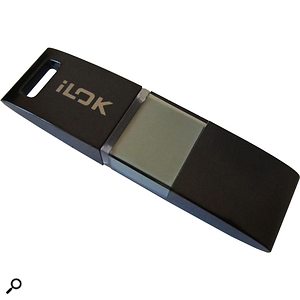 Physically, the updated iLok is smaller, which places less stress on the point of contact between it and the USB port it’s connected to, reducing the likelihood of it snapping in an expensive and infuriating way. Its reduced size also means that it won’t preclude the use of adjacent ports by other USB devices — indeed, two iLok keys can now be placed side by side, unlike before. The chassis itself is also more robust than the previous version — a welcome manoeuvre from PACE, given its increased capacity for licence authorisations. Up to 500 authorisations can be stored on the revised iLok; a fivefold increase compared with the previous generation.

PACE are selling the new iLok Smart Key from their website, for $49, though they say that people who still want to buy one of the older types can do so from retailers, while their stock lasts. At present, any licence that works on one type of iLok will work on the other, though PACE warn that as software developers seek to take advantage of the new iLok’s improved security features, they may stop supporting the earlier version.

For more information about the new iLok, check out the PACE web site, below.