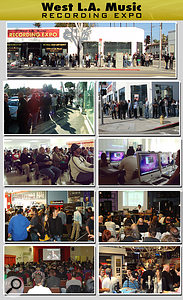 The event featured seminars by high-profile studio figures such as Michael Loyd, Teddy Riley, Bob Clearmountain and Francis Buckley, and covered a wide range of topics, from film scoring and pop production to home studio recording. Even legendary engineer and equipment designer Rupert Neve was there to deliver a keynote speech.

But that’s not all: the Expo also offered attendees the chance to check out some of the latest gear on the market, with exhibitors including Manley, Euphonix, Avid and SPL.

Perhaps the event’s biggest appeal, however, is that it cost absolutely nothing to attend. Not bad for a two-day show! For more information about West LA Music, check out their web site, below.