Published 16/5/18
Adds 'Biovox' module, new FX and can communicate with other iZotope plug-ins 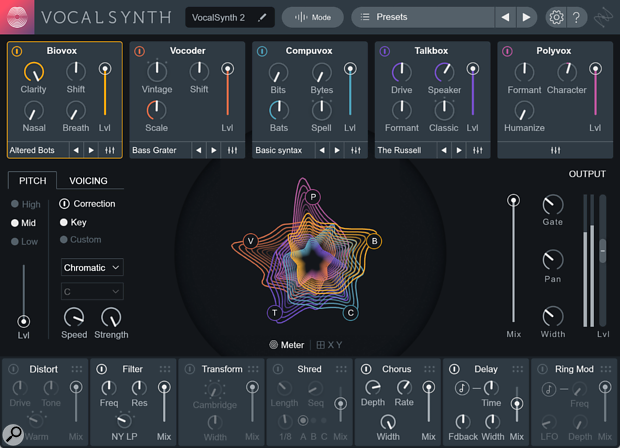 Conceived as an all-in-one vocal processor and multi-effects plug-in, the original VocalSynth covered everything from synthesized harmonies and subtle manipulation to full-on vocoding, glitching and singing synth sounds. For version 2, iZotope have redesigned the GUI, added new effects and more detailed controls, and introduced a completely new vocal manipulation engine.

The new Biovox module is said to be based on scientific modelling of the human vocal tract and allows you to alter characteristics like nasality, breathiness, vowel shapes and formants. Designed for smooth adjustment of a vocal’s character and texture, Biovox can be used in parallel with VocalSynth’s four existing modules — Vocoder, Compuvox, Talkbox and Polyvox. All of these have been overhauled since version 1, with improvements to sound quality and access to an array of advanced parameters.

In the effects section, you can now drag and drop the various modules to reorder the effects chain. Two new effects — Chorus and Ring Mod, the latter doubling as a tremolo effect — join the existing Distort, Filter, Transform, Shred and Delay modules. Finally, like many of the company’s recent releases, VocalSynth 2 has the ability to communicate directly with other iZotope plug-ins, appearing in Neutron 2’s Masking Meter and Visual Mixer, while multiple instances across the mix can be monitored and controlled directly from the Tonal Balance plug-in.

VocalSynth 2 is due to be launched later this month, priced $199. However, you can buy VocalSynth now for the reduced price of $149 and get a free upgrade to the new version when it’s released.