Published 25/9/07
Native Instruments announce numerous updates
Over in Berlin, Native Instruments have been hard at work on major updates to two of their most important products. As well as being a popular instrument in its own right, their Kontakt software sampler has also been licensed as a playback engine by countless third-party companies. 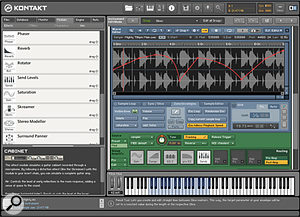 The latest version, v3, which will be available in October at a cost of £289, features numerous improvements. Perhaps the most obvious of these is a colossal new 33GB sound library, covering six categories: Band, Orchestral, Synth, Urban Beats, Vintage and World. There’s also a new sample editor permitting users to edit samples directly within Kontakt 3, coupled with ‘zone envelopes’, which enable “intuitive free-form parameter modulation on the sample level”, bringing new creative options for sound design. Enhanced looping and slicing features, meanwhile, open up new possibilities for working with loops and phrase samples.

Every instrument in the library now has its own ‘performance view’ interfaces, allowing you to make quick and easy adjustments to the sound. File and preset management has also been improved, with a context-sensitive ‘info pane’ which provides immediate help and tutorial information for all sections and functions of the instruments. Ease of use is further enhanced by new Instrument Navigator and Monitor Tab features, as well as an enhanced mapping editor, which makes creating and editing sounds easier, and lots of other improvements to the interface. As a result of all these changes, Kontakt 3, say Native, will be “more versatile, more efficient and more streamlined than ever”. Sound On Sound will, of course, be putting these claims to the test as soon as we can get our hands on a review copy! 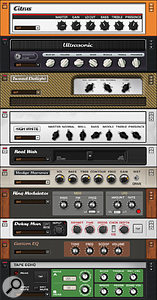 Also moving to version 3 is Guitar Rig, NI’s innovative guitar-processing software. The new version sees the arsenal of amps and effects expanded yet again, with four new amp models based on celebrated originals: Bogner Uberschall, Fender Tweed Deluxe, Orange Overdrive and Hi-Watt Custom 100. New effects include emulations of Marshall’s Jackhammer distortion pedal, the Real McCoy wah, and a complete model of the classic Roland RE201 Space Echo. Tempo-sync functionality has been improved for those modules that employ periodic effects.

As with Kontakt 3, much of NI’s development effort has gone into making Guitar Rig 3 easier to use and more versatile than its predecessor. To this end, there’s a new Matched Cabinet module, which automatically selects an appropriate speaker model to go with whatever amp model you’re using and presents a streamlined selection of controls. Preset handling has been improved, with a new ‘preset snapshot’ function, there’s an entirely new library of more than 250 patches, and there’s complete integration with NI’s Kore system. For those who use Guitar Rig on stage, there’s also a dedicated full-screen Live View, which presents the most useful information about the current preset in an easy-to-view format.

Finally, the dedicated Rig Kontrol hardware unit has also been improved, with ‘studio-grade’ converters and new features aimed at live use. Guitar Rig 3 will be available in October; the Kontrol Edition, which includes Rig Kontrol, will retail at £349, while the Software Edition costs £219. Again, you can expect an SOS review as soon as it lands on our desks.

Both Kontakt 3 and Guitar Rig 3 are also included in the latest version 5 of NI’s turbo-charged Komplete bundle, along with the impressive Massive soft synth. The full Komplete, which now retails at an even more enticing £699, has been joined in NI’s range by two further, themed bundles, each costing £289. Komplete Classics contains Akoustic Piano plus NI’s three vintage keyboard emulations: B4 MkII, Elektric Piano and Pro 53. Komplete Synths, as the name suggests, collects together NI’s major soft synths, namely Absynth 4, FM8, Massive and Pro 53. Buying the Classics or Synths bundle entitles you to a discounted upgrade to the full Komplete at a later date, should you become hooked.
For all the details, check out Native Instruments’ feature-packed web site.