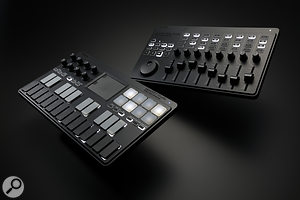 As well as unveiling their brand new Minilogue four-voice analogue synth, Korg have also revealed a pair of new mobile MIDI controllers that they will be showing at the NAMM show next week. The emphasis is really on portability here, with both being battery-powered and able to connect wirelessly to iPhone/iPad or Mac/Windows machines via Bluetooth MIDI. Korg promise low latency and high stability, but if you’re skeptical, connection via USB is also possible.

The nanoKey Studio sports 25 velocity-sensitive keys, eight knobs, eight trigger pads and an XY touch pad, and aims to make things easy even if you’re not a hot-shot keyboardist. It provides step recording features and a ‘Scale Guide’ function that illuminates the keys to show recommended notes in a scale.

The eight trigger pads are all velocity sensitive and can be used in the usual way to trigger audio clips, but can also be used in Chord Scale mode. This automatically assigns the best chords for the key and scale you’ve selected, making track construction for the less musically inclined even faster.

As you’d expect from Korg, the touch pad is inherited from the Kaoss series and can work in conjunction with a built-in arpeggiator with rhythm patterns.

The nanoKontrol Studio is the same size as the nanoKey Studio — a little under a sheet of letter-sizer paper — and also features the same white LED backlights as its more musical sibling. The nanoKey Studio, however, is much more geared towards tracking and mixing on the g, rather than playing. It sports a transport section with jog wheel, plus mixer controls — eight faders, eight knobs, and track mute, solo, record and select buttons for each track.

With all the controls available, Korg are also providing Korg Kontrol Editor software  that lets you freely customise the settings of nanoKontrol Studio and assign any slider, knob or function to any MIDI message. FOr Garageband users, there will also be a Control Surface plug-in available.