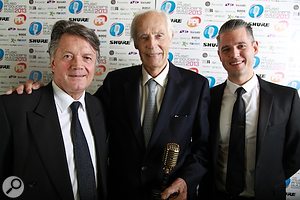 L-R Fran Nervkla (PPL), Sir George Martin CBE, Paul EpworthLast night, in London's historic West End, the great and the good from the UK recording industry amassed for the fifth annual Music Producers Guild Awards. Compered by Lauren Laverne, the awards recognized the skill, creativity and talents of music recording professionals, and were presented to studio veterans and younger recording talents alike in what was, at time times, a moving ceremony.

The UK Producer of the Year, sponsored by the BRIT Awards 2013, is a two-fold honour, as the recipient also walks home with a BRIT. This year’s winner, Paul Epworth (far right), said he was “humbled” to receive the award from his elders and peers. Epworth picked up the award for his work with Azealia Banks, The Big Pink and Florence + The Machine, among others. His work was further commended with Ceremonials by Florence + The Machine claiming the UK Album of the Year award, sponsored by Sontronics, beating albums by Ed Sheeran, Paloma Faith and Alt-J. 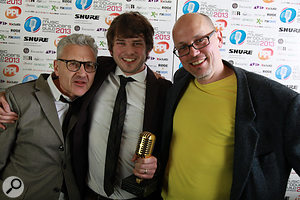 (L-R) Clive Langer, Charlie Andrew and Sam Inglis (SOS)Alt-J’s Mercury Award winning An Awesome Wave didn’t go completely unrecognised, though. Charlie Andrew, producer of Alt-J’s debut, won the Breakthrough Producer of the Year Award, which was presented in association with Sound On Sound and sponsored by Focusrite. An interview with Charlie Andrew will be appearing in the April issue of Sound On Sound, so keep your eyes peeled for that. Another new talent recognised was Charlie Hugall, who won the Breakthrough Engineer of the Year award, sponsored by Genelec, for engineering on + by Ed Sheeran.

The MPG was keen to highlight recorded music’s heritage, honouring the legendary Sir George Martin CBE (above centre) with The Outstanding Contribution to UK Music award, sponsored by PPL, and presented by Paul Epworth. In a similar vein, Glyn Johns, notorious creator of the three-microphone drum recording technique of the same name, was awarded the MPG Innovation Award, sponsored by Prism Sound. Johns’ work with The Rolling Stones, Led Zeppelin, The Who, Steve Miller Band and Joan Armatrading has cemented his name in recording history, yet in a modest and heartfelt speech he said it was “a privilege” to be presented with the award.

Despite facing tough competition from Mark ‘Spike’ Stent and Tom Elmhirst, Alan Moulder was victorious in the prestigious Mix Engineer of the Year category, sponsored by Solid State Logic. The award was, in part, for Alan’s work on Led Zeppelin’s Celebration Day, which was the focus of an Inside Track article in January’s edition (http://www.soundonsound.com/sos/...) but he has also worked with The Killers, Blur, The Big Pink and Richard Hawley. 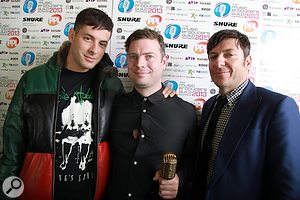 (L-R) Mark Ronson, Al O'Connell, Damian Wilson (Rode)The coveted Engineer of the Year award, sponsored by Rode, went to Al O’Connell, for his work with Rufus Wainwright and on Ill Manners with Plan B. Presenting the award was Mark Ronson, who called Al’s drum sound “the best in the business”.

AIR Studios’ Matt Colton, whose recent credits include James Blake and Coldplay, scooped the Mastering Engineer of the Year award, sponsored by Radial, and Snap! Studios came out on top in the Studio of the Year category, sponsored by Pro Sound News Europe.

The nominations for Live Production of the Year, sponsored by Shure, couldn’t have been stronger, but Bon Iver at AIR Studios received the award, beating both The Olympics Opening Ceremony and Adele at the Royal Albert Hall 2011.

Sponsored by Novation, Remixer of the Year was announced as Unkle , while UK Single Song of the Year was awarded to The Maccabees for ‘Pelican’, an award picked up by Cenzo Townshend on behalf of the band.

As you’d expect, there was a strong field in the international categories. Danger Mouse beat serious opposition from Jack White and Max Martin, to take home the International Producer of the Year award, sponsored by British Grove Studios for his work with The Black Keys on El Camino. Scooping the International Recording Engineer of the Year award, sponsored by KMR Audio, was mixing veteran Tchad Blake, also in part for his involvement with the same album.

With the new A&R Award, the MPG recognise an A&R executive who has genuinely championed the creative process across one or more projects this year. Deservedly claiming the top spot this year was Richard Russell of XL Recordings for his work alongside Damon Albarn and Bobby Womack on The Bravest Man in the Universe. Looking further behind the scenes, Rebecca La Porta and Paul Walmsley from Polydor/Fiction were given The Unsung Hero Award, sponsored by Audient.

Finally, in the year of the 20th anniversary of Debut, Icelandic experimenter Björk was awarded The MPG Innovation Award. Mastering engineer Mandy Parnell said Björk shows “how cutting-edge technology and art can work seamlessly together”, when referencing Biophilia. The album is available digitally, physically and also as an immersive musical iPad app.