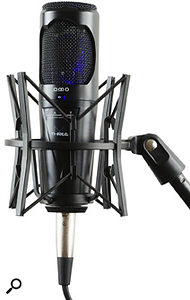 ART are well known for their range of cost-effective, functional audio gizmos, but this year’s NAMM show marked a company first. In fact, four company firsts, with the launch of a new range of microphones.
Three of the new mics, the M One, M Two and M Three, are large-diaphragm, solid-state condensers. The most basic is the M One, a ‘no frills’, fixed-cardioid model that ships with a ‘hard tail’ mounting bracket. The M Two is similar apart from the addition of a pad switch, which can attenuate the mic’s signal by 6dB or 12dB, and a dual-position high-pass filter, which rolls off at 100Hz or 200Hz. It comes with an aluminium carry case and a shockmount. The M Three (pictured) has the same pad and low-cut features as the M Two, but is a multi-pattern mic, with cardioid, figure-of-eight and omnidirectional polar pickups to choose from. All three new condenser mics intriguingly have blue LEDs mounted inside the headbasket.
The remaining new mic from ART is the M Five (what happened to the M Four!?), a ribbon mic with a lollipop-style look. According to the manufacturers, it can handle SPLs up to 148dB, and its tonality lends itself to vocal and instrument tracking. It too comes with a carry case and a elastic mounting system.
In other ART news, the company have revamped their MPA Gold, calling it the Pro MPA II, and updated the Digital MPA, which is now referred to as the Digital MPA II. Apart from reworked front panels, the new rack units have stereo link capabilities and Mid-Side matrices built in. Also, a three-way version of the S8 two-way mic splitter has been launched. Each channel of the sensibly named S8 3-Way has a mic input, a direct output, and a pair of transformer-isolated XLR outputs. More information can be found at ART’s web site.