Moog Music have released the first installment of Giants, a new documentary film series exploring the early days of electronic music. The new cinematic offering from Moog Music spotlights untold stories from some of the most important artists and innovators in modern music history and aims to honour and preserve their legacy.

Filmed and produced by Moog Music, the Giants series is a platform for legendary electronic musicians and innovators to express themselves through the art of storytelling. All the artists in this series have left an indelible impact on electronic music history and culture, and their contributions have pushed the art-form and industry forward. Moog say: "They are the 'giants' whose shoulders we stand on — the pioneers who propelled synthesizers and analog instruments into the mainstream many years ago." 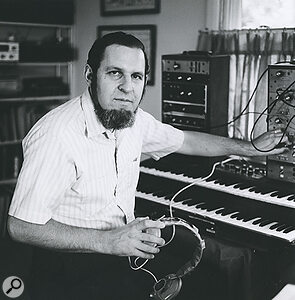 Herb Deutsch co-inventor of the Moog pictured with a prototype modular synthesizer.

The first Giants documentary, released on his 90th birthday, focuses on Herbert Deutsch co-inventor of the Moog modular synthesizer. The composer, music educator, and friend and collaborator of Bob Moog journeys back in time to talk about some of music history's most prolific moments and expand on 'the perfect definition' of what music is and can be: sound organised in time.

Further films in the series will feature early modular synthesizer adopter Bernie Krause, modular synthesis legend Suzanne Ciani, and Mute Records founder Daniel Miller. Through spoken interviews, original music and visuals, these artists share their perspectives around how electronic music has evolved and provide context for their place in that story.