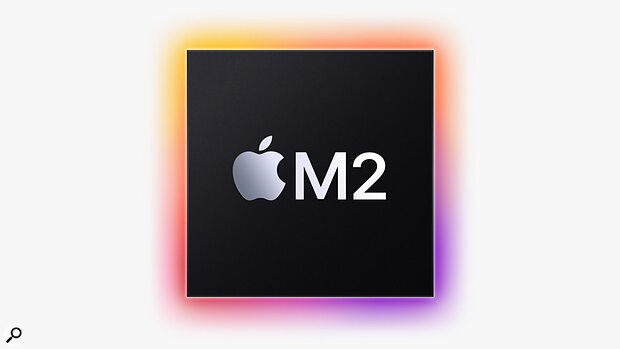 Apple have introduced two new MacBooks at WWDC, a newly designed MacBook Air featuring their new M2 processor, and an updated version of the current 13-inch MacBook Pro, which now also features an M2 chip. Two versions of the processor are available, both featuring an eight-core CPU, with either an eight-core or 10-core GPU option on offer. Apple are claiming performance increases of 18% for the CPU, and 35% for the GPU when compared to the M1.

Memory bandwidth is now said to be 50% faster, and all of the new M2-equipped machines are able to support a maximum 24GB of unified memory, an increase from the 16GB limit of the previous M1 versions. In terms of drive space, each of the new MacBooks are able to be ordered with up to 2TB of internal storage.

The MacBook Air has been completely redesigned, moving away from the ‘wedge’ shaped shell of the previous model and sporting a look more similar to the MacBook Pro. Measuring 11mm thick and weighing just 1.24kg, it’s even thinner and lighter than its predecessor whilst still offering increased performance thanks to the M2 processor. Despite this increase, the efficiency of the M2 processor means that power consumption is still broadly comparable to the previous model, with claims of up to 18 hours battery life. Another benefit of the low consumption is that the Air does not feature a fan, making operation completely silent.

The screen is slightly larger (13.6 inches compared to 13.3 inches for the previous model) with a marginally higher resolution, as well as benefitting from a brightness increase from 400 to 500 nits. A 1080p webcam replaces the previous 720p version, with the M2 chip also improving the image quality and low-light performance. Apple’s Magic Keyboard design makes an appearance, complete with physical function keys and a Touch ID button, with the space in front of the keyboard occupied by a larger Force Touch track pad.

The MagSafe power connector has made a return, leaving two dedicated Thunderbolt/USB ports to connect any power accessories and peripherals, with support for up to a 6K external display. A 3.5mm headphone socket is also provided, which supports the use of high-impedance headphones. The MacBook Air will be available in four colors, with Apple adding Starlight and Midnight options to their usual Silver and Space Grey offerings.

The 13-inch MacBook Pro design remains the same as the original M1 model, still featuring a Touch Bar rather than a function key row and the same connectivity. It does however benefit from the performance increases and higher memory limit provided by the new M2 processor, and Apple say that the battery life has been increased, with this updated version capable of up to 20 hours use compared to the previous machine’s 17 hours.