Native Instruments have followed up their trio of highly regarded Kontakt drum libraries (Abbey Road ‘60s Drums, ‘70s Drums and ‘80s Drums) with the most up-to-date product in the range, Abbey Road Modern Drums. Like the other Abbey Road drum libraries, it was recorded in the legendary North London studio using their world-famous collections of microphones and outboard gear. Names dropped in the press release include Brauner, Neumann, SSL, EMI and Fairchild, while the drums themselves were provided by Drum Workshop (a Collector’s Series kit) and Pearl (a Reference drum set). The cymbals used for recording were models from Sabian and Zildjian, and each drum kit was recorded with three different snare drums. 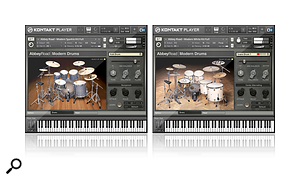 Apparently captured with “painstaking precision”, the library includes recordings of the drums in both Studio One and Studio Two at Abbey Road, with up to 27 velocity layers being captured. There are even a few somewhat unconventional samples in the library, incuding a range of “splash on snare” sounds (an interesting percussive effect obtained by placing a splash cymbal on top of the snare drum), plus the sound of a kick drum being miked up with a rewired monitor speaker (a trick commonly achieved with the bass driver from a Yamaha NS10).

The Kontakt scripts included with the samples (of which there are over 40,000, by the way!) incorporate sophisticated randomisation features to increase realism, and subtle tonal and timing variations make the instrument “virtually indistinguishable from a studio-recorded drum performance”.

Available now, Abbey Road Modern Drums can be purchased from the NI web site either as a DVD or a download, for 99 Euros.