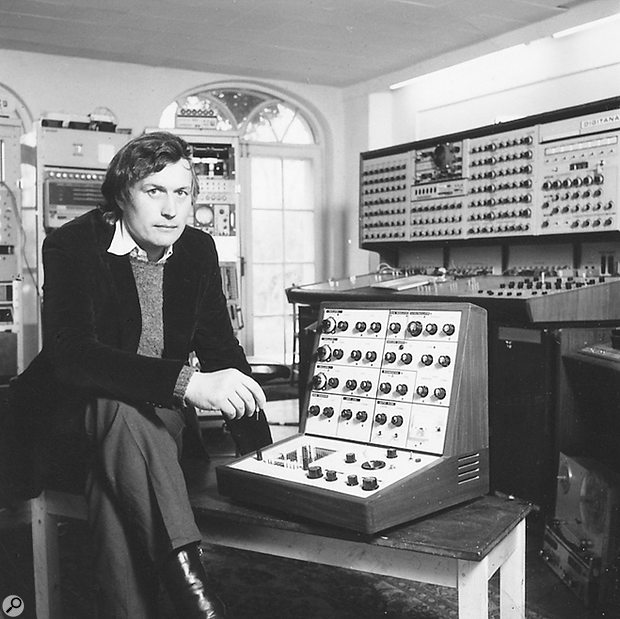 Peter Zinovieff with the EMS VCS3.

It is with great sadness that we report the passing of early British electronic music visionary Peter Zinovieff, after a fall at his home last month. His company EMS produced the first British synthesizers in the ’60s and he was perhaps the first person in the world to experiment with computer-based sampling. He remained a part of the electronic music scene to the end, and an active composer and performer well into his 80s.

The son of Russian aristocratic emigrés, Zinovieff was born in London in 1933. He gained a doctorate in geology at Oxford University in 1958 and briefly worked as a geologist, but left the field when travel became too much for his young wife, and spent a brief stint as a mathematician at the Air Ministry.

Zinovieff then made another change of direction to become an electronic musician, a hobby he first started at Oxford. He set up his first studio in his house in Ebury Street during 1962 and took lessons in tape manipulation and splicing with Daphne Oram at the end of that year. As he had given up his original career for her sake, his wife allowed him to sell her debutante tiara, and he used the money to buy a DEC-PDP-8/S computer (in the days when computers cost more than a house), and set it up at his home (at first in a garden building, then later in a room in his house), using it to create his first electronic music compositions. Peter often said that he was probably the first person in the UK to have a computer at home.

While conducting these early experiments, Zinovieff founded Unit Delta Plus, a collective investigating electronic and computer music at his Putney studio, with fellow pioneers Delia Derbyshire and Brian Hodgson of the BBC Radiophonic Workshop. The collective spit in 1967 and in 1968 Zinovieff’s ‘Partita For Unaccompanied Computer’, the first ever performance by a computer with no human performer involved, was performed at the Queen Elizabeth Hall.

With fellow designers David Cockerell and Tristram Cary, Zinovieff founded Electronic Music Studios (always abbreviated to EMS) in 1969 from the same premises (their most famous product would always be known as 'the Putney' in the USA), and initially offered custom products on commission. That work ultimately resulted in the legendary VCS3.

The VCS3 generated a huge amount of interest from popular musicians, in particular the Beatles. Zinovieff fondly remembered delivering one to Ringo Starr and giving him a lesson on it. But it was Pink Floyd who made the VCS3 famous, with every member of the band credited as having used it on their classic album The Dark Side Of The Moon. You can see David Gilmour demonstrating how they came up with the seminal ‘On The Run’, using the keyboard sequencer which came with the follow-up Synthi AKS, in this YouTube clip. 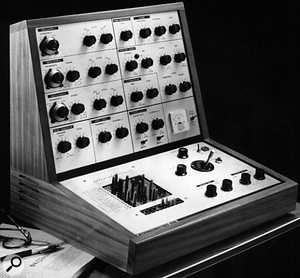 EMS VCS3 synthesizer.Brian Eno famously played solos using the knobs on his VCS3 with Roxy Music, and German synth acts like Tangerine Dream and Klaus Schulze featured the VCS3 at the heart of their systems. Later, both Jean-Michel Jarre and Kraftwerk made the VCS3 a central part of their setups and spoke of how key it was in developing their signature sounds.

Other EMS products included the Synthi 100, a full modular system which was used by the BBC Radiophonic Workshop; and the Synthi Hi-Fli, an early guitar synth used by Dave Gilmour with Floyd and Steve Hackett with Genesis. However, the company were overtaken by products from American and Japanese manufacturers, and went bankrupt in 1979.

Zinovieff then took time away from electronic music to teach, but returned to composition in 2011 and created works with musicians like cellist Lucy Railton and violinist Aisha Orazbeyeva. These included a spatial element in the positioning of speakers and sound generators, with the live performer in the middle. Studio recreations were released as RFG for Cello and Computer and two OUR concertos. An album of his earlier collaborations with the likes of Harrison Birtwistle and Hans Werner Henze was released in 2015, and he was made an honorary Doctor Of Music by Anglia Ruskin University in the same year.

Zinovieff was personally invited by Jean-Michel Jarre to his 2016 Electronica concert at London’s O2 as “one of the guys who started all this”, and was publically acknowledged as one of the earliest electronic music pioneers in a BBC documentary which also featured his early appearance on Tomorrow’s World.

Zinovieff married four times and had seven children, including author Sofka Zinovieff, whose novel Putney references her time growing up around the legendary garden studio by the Thames.

SOS spoke to Peter about his extraordinary life and work back in 2016 — check out our in-depth Video Feature below. To find out more about the legendary EMS company and the instruments they made, read our two-part history of EMS here, and for an in-depth look at the classic VCS3, read Ian Boddy's 1994 retrospective here.

Thanks to James Gardner for his assistance with this article.

A personal tribute from David Vorhaus

Peter was a true inventor and explorer. He was making computer music years before it was thought possible and his 1968 Queen Elizabeth Hall solo computer concert was a world one-off.

He was a fascinating personality who would keep your intellect alive. He was always interested and always interesting. He was kind and he was caring and generous. I bought the very first VCS3 that EMS sold, which I still have today. It arrived with a bottle of Dom Pérignon champagne!

I know some people said the VCS3 wouldn't play in tune (some truth in that. And that inspired my Kaleidophon. Thanks Peter!) but with a few mods and a little coaxing it could make a pretty impressive sound!

Peter will be dearly missed and I know thoughts about him will be popping into my head for the rest of my life. He was a true pioneer.