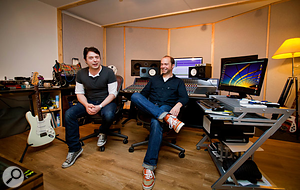 The weekend event runs from Friday to Sunday and covers everything from pre-production to Mastering, it is a real opportunity for musicians, engineers and budding producers alike to explore the fine art of record production in a beautiful country setting. It's a great chance to explore music production in a friendly, encouraging setting designed to cater for everyones prior skill, knowledge and understanding.

Friday evening starts with Informal introductions with the producers, talks and discussions with the group and after dinner, moving onto pre-production techniques/production deals & music business discussions.  Saturday kicks off at 10am after breakfast, straight at it, setting up with the band, mic'ing up, line checking.... along with taking an in depth look at mic/pre amp choice/ routing, everything to make sure we get that optimum pristine recording quality. Then we move on to 'The take'. What makes a great take?.. identifying what makes something special even if it has flaws..The afternoon will comprise of doing takes and selecting the best performances, moving onto individual instrumentation for overdubs, looking at 'take 'selection, editing and comp'ing. Once we've got it all into shape we're in a good position to start looking at Mixing....
Mixing will take place on Sunday in Studio 2, this room is orientated to mixing especially and has a  really nice selection of our board gear, just the job for mixing some big sounding records! Firstly getting into the correct 'setup' then moving onto the black art of production, exploring some amazing techniques as well as exploding some myths too!  After the mix is in place, we then move onto 'Mastering' looking at acurate, compression, eq and limiting to squeeze the very best out of our tracks ready for manufacture.

When our works done we can relax with a few drinks at the local, a great opportunity to wind down and discuss what we love the most!

For further info, please check out http://musicmasters.co.uk/  or if you get a chance, maybe go and see them at Kendal Calling festival this for more highly enthused Music Production discussions! http://www.kendalcalling.co.uk/theacademy