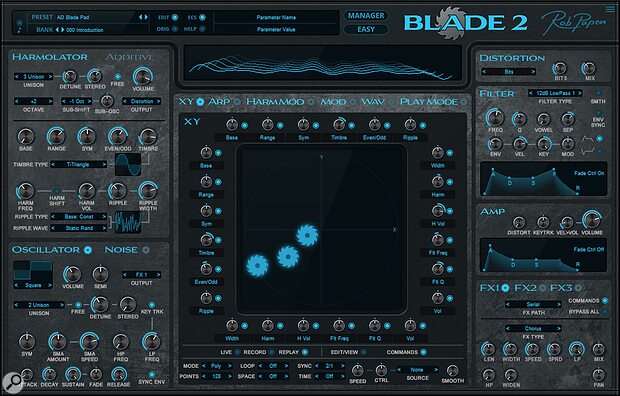 Software instrument guru Rob Papen has unveiled a sequel to his well-received 2012 release, Blade. Blade 2 builds on the original's additive synth engine, with an all-new GUI that offers more intuitive control over its 96 partials, 16 timbre types, and many modulation options.

One of the headline improvements over Blade is an enhanced X/Y pad, which can now be assigned to modulate any of Blade 2's parameters. Extra subtractive-style oscillators have also been added, including four classic wave shapes (sine, saw, triangle and square), and a four-voice Unison mode. The all-important filter hasn't been left out either, and now boasts no fewer than 36 filter types and a graphically editable envelope. Further enhancements have been made to the arpeggiator, which can sequence notes or X/Y pad positioning, and now also features a ratchet function.

One intriguing extra comes in the form of the new WAV page. Here, you can upload an audio file of your own, whereupon Blade 2 will analyse it and turn it into a static user waveform.

Blade 2 incorporates three separate effects engines, and all of those effects' parameters can be manipulated in real time via MIDI, or addressed in the modulation matrix.

In short, then, Blade 2 is a complex instrument, about which there's far more to say than we have space for here. If you want to explore it further, you can watch Rob Papen's introductory video below, or click this link to download a free 30-day demo.

Rob Papen's Blade 2 is available to buy now from Time + Space, and costs €99.