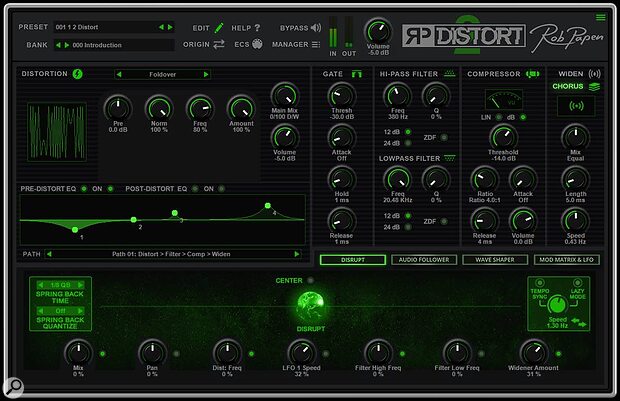 Rob Papen have released RP-Distort 2, the successor to their popular distortion plug-in. The effect is built around a main Distortion module which boasts 52 different types of distortion, with varieties on offer including Lo-fi, Overdrive, Fuzz, Amp and Cabinet models and many more, whilst the inclusion of a new Wave Shaper function allows users to craft their own distortions. In addition to the main module, the plug-in also features Compressor, Filter and Widen/Chorus sections. Control over multiple parameters is made possible by the inclusion of LFOs and a Modulation Matrix, providing users with a huge amount of creative options.

On the list of new features is the ‘Disrupt-Sphere’ function, which has made its way over from the company’s DelSane delay plug-in, allowing several parameters to be controlled from a single slider, and an Audio Follower function which allows parameters to be modulated by signals from audio inputs. The EQ control within the distortion module can now be set to pre- or post-distortion, and all modules within the plug-in can have their position in the signal path altered.