Published 16/6/07
Top score-writing package reaches version 5
Sibelius Software have announced a major upgrade to their eponymous Mac and Windows package. As well as incorporating a veritable glut of new features, Sibelius’s developers have also rewritten the Mac version from the ground up so that it is not only compatible with Intel Macs, but also adheres to Apple’s latest design guidelines. Mac users should, therefore, find that Sibelius 5 — which now requires Mac OS 10.4 or later — is far slicker and more responsive than previous versions. The Windows version, meanwhile, is Vista-compatible, with an interface that takes full advantage of Microsoft’s Aero technology. 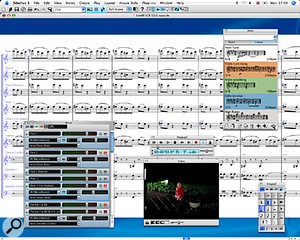 A lot of development work has gone into improving Sibelius’s playback capabilities. The headline news for many users will be full support for VST and Audio Units plug-ins, allowing you to use any combination of software instruments and effects to play back your scores. This is complemented by an interesting new technology called Soundworld. A layer of abstraction that sits between scores and sounds, Soundworld intelligently decides how instructions in the score should be mapped to instruments and samplers. The idea is that as long as the necessary XML metadata is available, the user can simply rely on Sibelius to choose the most appropriate sounds from the palette installed on his or her machine.

The palette supplied with Sibelius has been completely overhauled in version 5, too. The new sound library totals some 3GB, and uses NI’s Kontakt Player 2 as a front end, with much improved loading times and functionality. There’s a full GM sound set taken from M-Audio’s Session instruments, and a wide range of high-quality samples from the likes of Sonivox and Garritan. A new mixer incorporates auxiliary and master effects slots, and Sibelius can now export its audio playback off-line, glitch-free and faster than real time.

A new feature that many composers will love is the Panorama view, which presents your entire score on one enormous, scrolling page, rather than spread across multiple pages. A particularly nice touch is that, even in lengthy scores, you never lose track of which staff is which, because you can always see the clef, instrument name and key signature, now matter how far you’ve scrolled along the panorama. 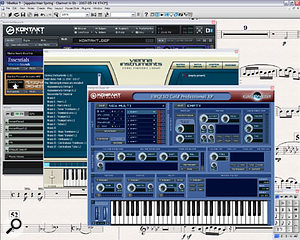 Another big idea is, well, Ideas, which sees Sibelius incorporating techniques more usually associated with loop-based composition tools such as Acid or Ableton Live. An Idea in Sibelius would normally be a short passage of notation, although it can be absolutely anything. Ideas are created by making a selection and hitting Shift+I, and once created, they can be tagged with appropriate metadata. User-created Ideas appear alongside more than a thousand supplied examples in the floating Ideas Palette, whence they can be searched and auditioned at a click. When you’ve found an Idea you want to use in your score, you can simply copy it and paste it onto a staff, and it will automatically be transposed to fit the key of the score.

As ever, there are also innumerable smaller improvements. A big time-saver for some will be a new feature that imports text files and intelligently fits lyrics to your score — in six languages, including Latin! It’s now easier to create title pages, there’s more flexible handling of blank pages, page and bar numbers, there are new plug-ins, and for the first time the actions of plug-ins can be undone. There’s a new Instrument Change object, allowing you to notate multiple instruments in turn on a single staff. Finally, the new Paste as Cue option vastly speeds up the process of creating cues in individual parts. If you want the brass section to take their cue from a violin phrase, for instance, you can simply select that phrase in the violin staff and Paste as Cue into the brass instruments’ staves. Sibelius 5 is shipping at the end of June, costing £595. Education versions are £426 and upgrades start at £117. Prices include VAT.