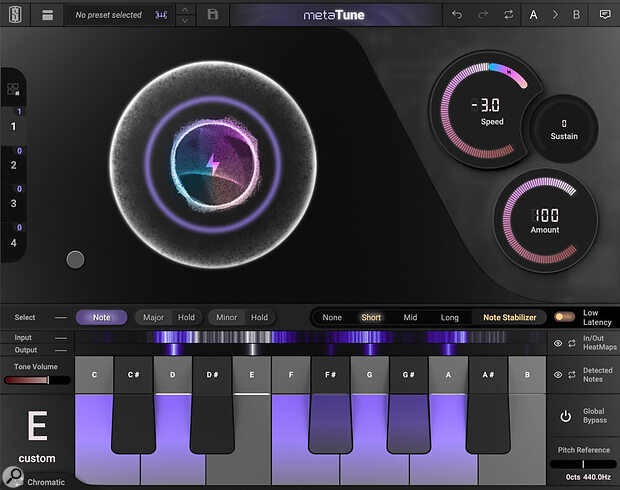 Slate Digital's hotly anticipated MetaTune is now finally available. Billed as “the best automatic tuner on earth”, Slate are hoping to take a bite out of the Auto-Tune pie with an intuitive pitch-correction tool that's capable of both subtle and robotic pitch correction, as well as creative doubling effects.

Once you've selected your key (a process made easy thanks to an innovative 'Note HeatMap' that shows the pitch of the source audio), there are just three main controls: Speed, Amount and Sustain. The Speed control is notable in that it offers negative values — essentially letting you correct a note's pitch in advance of it sounding, for extreme robotic effects.

Another MetaTune innovation is Groups, which allow you to link multiple instances of the plug-in in a session, and control them all from one UI — which would be a huge time-saver when working with stacked backing vocals.

Slate Digital's MetaTune is available now, and costs $199 for a perpetual licence. It's also available as part of Slate's various All Access Pass subscription plans, and there's even a free demo available so you can try before you buy. Check out the video below to see and hear it in action.