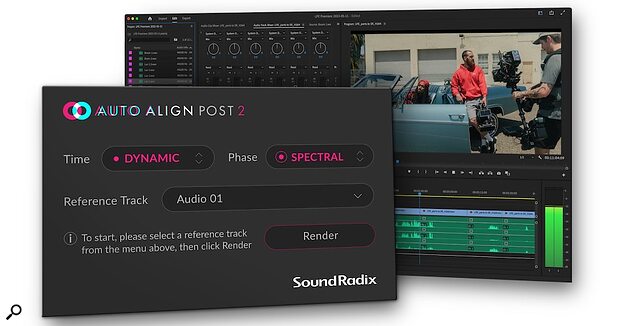 Sound Radix have released version 2.1 of Auto-Align Post. As well as some improvements to the plug-in’s algorithm, the update also introduces compatibility with Adobe Premiere Pro, and native support for Apple's M1 and M2 chips.

Auto-Align Post enables users to apply time-alignment correction to multitrack recordings that have been captured using a mix of moving microphones, such as a combination of boom and body-worn microphones when filming on location, for example. This helps to quickly eliminate the phase artefacts and comb-filtering caused by time-of-arrival differences, saving dialogue editors a huge amount of manual editing work during the post-production process.

Version 2 of the software introduced a new spectral phase correction module along with a refined algorithm and some user interface improvements, and now this most recent update brings the plug-in’s functionality directly to users of Adobe Premiere Pro, and introduces native Apple Silicon support.

"We're happy to empower Adobe Premiere Pro professionals with a native version of Auto-Align Post 2, saving the time needed for a round-trip export to an external audio workstation. This continues our effort to help achieve the rich, high-quality dialogue sound users have grown to expect from Sound Radix." - Nir Averbuch, founder of Sound Radix

Auto-Align Post v2.1 is supported on PCs running Windows 10 or higher, and Macs running macOS 10.9 and above. iLok Licence Manager version 5.4 or newer is required, and the plug-in is available in  AudioSuite, AAX, VST3/ARA2, and Adobe Premiere Pro Extension formats. The minimum versions of supported hosts are as follows: Pro Tools 11, Cubase/Nuendo 11, Reaper 5.984, Studio One 4.5, and Adobe Premiere 2020-14.0.

Version 2.1 is available now as a free download for all existing users. For those wishing to purchase the plug-in, Auto-Align Post v2.1 is priced at $399. A 14-day trial version is also available.