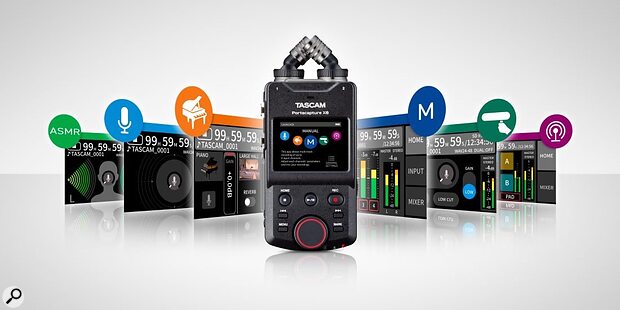 Tascam have announced the upcoming release of the Portacapture X6, a new portable multitrack recorder that offers many of the features found in the Portacapture X8, but in a smaller frame with a slightly reduced channel count.

Like its larger sibling, the X6 houses a pair of built-in microphones which can be rotated to form either an X/Y or A/B array, and two additional microphones can be connected via a pair of XLR connectors. Both of the external inputs employ Tascam’s HDDA preamps and offer independently switchable phantom power, and will also happily accept line-level signals of up to +24dBu. A trio of 3.5mm mini-jack connectors then offer a Mic/Ext In connection, a stereo line-level output, and a headphone output. 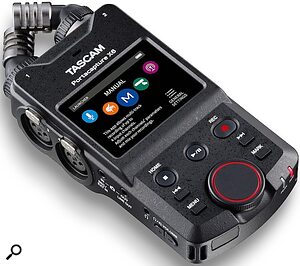 The Portacapture X6 features a 2.4-inch touchscreen which provides an app-like user interface.A total of six tracks – each individual input plus a stereo mix – can be recorded simultaneously to either WAV or MP3 files, and the device is also capable of functioning as a 6-in/2-out USB audio interface. Sample rates up to 96kHz are supported, and 32-bit floating point functionality essentially eliminates the chance of clipping when recording to the on-board microSD card slot. The unit currently operates at 24-bit when being used as an audio interface, although 32-bit USB audio transmission is planned for a future update.

Much of the recorder’s functionality is accessed and controlled via a 2.4-inch colour touchscreen, with users offered the choice of six different built-in apps (Manual, Voice, Podcast, Music, Field, and ASMR) that each optimise the user interface depending on the task at hand. Some hardware buttons and a rotary control are still present, though, offering direct access to commonly used functions such as record arming, play and stop, gain control, and menu access.

The Portacapture X6’s on-board mixer is equipped with a range of processing, boasting an EQ, low-cut filter, compressor, limiter, automatic gain control, a noise gate, and more. Some other useful features include a pre-recording function which allows the device to capture recordings prior to the record button being pressed, and a mode which enables the device to begin recording automatically based on the level of incoming signals. A Bluetooth dongle (available as an optional extra) also allows the device to be controlled remotely from a mobile device using Tascam’s Portacapture Control app.

Power can be delivered by four AA batteries, USB bus power, or an optional AC adapter, and microSD, microSDHC, and microSDXC cards are all supported up to a maximum capacity of 512GB.

The Portacapture X6 will be available in late February 2023, with pricing yet to be announced.