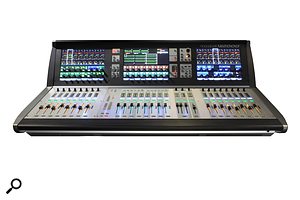 The latest addition to Soundcraft’s flagship range of Vi digital mixing systems is the Vi2000. More compact than its larger siblings, the new kid on the block nevertheless features three sophisticated control screens and the ability to handle up to 48 mic/line inputs and 16 line outputs, all connected at the rear of the mixer. Designed as an entirely self-contained system, the Vi2000 can also easily be expanded to handle up to 246 inputs and outputs via two expansion slots that will connect to MADI stageboxes or accommodate Studer D21m audio interface cards.

The Vi2000 has 16 input and 8 output faders packed into its compact frame, and its three touchscreens feature Soundcraft’s unique Vistonics interface. While other systems feature context-sensitive rotary encoders arranged around the outside of the screen, Vistonics mounts the knobs within the screen itself, so you’re always looking right at the parameter you’re tweaking. Other proprietary Vi features, like the intuitive colour-coded FaderGlow lights built into the fader tracks, are also to be found here and the Vi2000 is built around Soundcraft’s 40-bit floating point SpiderCore DSP engine. A built-in Dante interface, providing 64-in/64-out interfacing with Macs and PCs via Ethernet, completes what looks like a very powerful proposition in a very compact package. There’s no word yet on pricing and availability, but we look forward to taking a closer look at this new console.