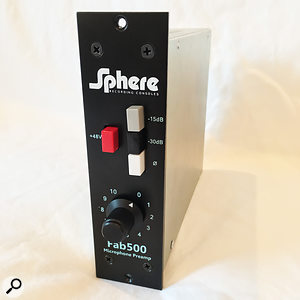 Operating from the early ’70s until the early ’80s, Sphere manufactured large studio consoles that graced facilities such as Sigma Sound Studios, home of the “The Sound of Philadelphia", and were used by the likes of The Rolling Stones, Boston and Cheap Trick as well as numerous Nashville country artists. Now the brand is being reborn in a series of products derived from the original designs, starting with the mic preamps.

First established as an off-shoot of highly influential console makers Electrodyne, today Sphere are more of a well-kept secret than a household name. The brand has recently been revived by Duncan Rowe, who fell in love with the Sphere sound while working as a recording engineer. As well as repairing and reselling vintage Sphere consoles, he has decided to launch a new range of Sphere outboard.

The first two products are the Fab 500, a 500-series mic preamp module, and the Fab Four, a 1U 19-inch rackmount unit containing four Sphere preamps, the sound of which Rowe describes as “in between a Neve and an API”. Built to the original spec, down to sourcing transformers and op-amps from the original suppliers, each channel of the Fab Four and the single-channel Fab 500 features a gain knob and switches for -15 and -30 dB pads, phantom power and phase invert.

“We were blown away by the attention the Fab 500 received at Summer NAMM,” says Rowe. “People are aware of the Sphere console sound from albums like Some Girls and tons of classic ‘70s R&B. The first and most important aspect of that sound is the mic preamp, and the Fab 500’s design is completely true to the original circuitry of the Sphere consoles. We’re proud to now offer it in a 500 Series format as well as a four-channel rackmount version with the Fab Four.”

Plans are afoot to produce further 500-series modules based on the original EQ circuits. The Fab Four costs $1,899 while the Fab 500 is priced at $690.

Check out our interview with Duncan Rowe from the recent Summer NAMM show in Nashville, Tennessee.

Mastering Essentials Part 3 - How loud should I master?
1 week 2 days ago.