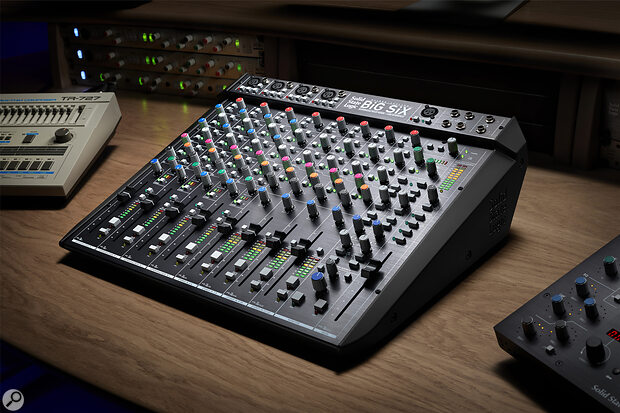 Oxford console legends SSL took the compact mixer market by storm two years ago, with their dinky yet powerful SiX 'SuperAnalogue' console. That mixer succeeded in translating 'large-format' features like flexible routing, talkback and bus compression to the desktop format, and we were so enamoured by it that we awarded it a 2019 Gear Of The Year gong.

Now, they've released a bigger brother, the aptly named BiG SiX. As well as increasing the channel count, and adding other niceties like preamp polarity inversion, and EQ to the stereo channels, they've addressed one of our only complaints about the original SiX: the lack of any computer interfacing. The BiG SiX incorporates a 16-in/16-out USB interface, with remarkably flexible routing to accommodate any tracking, mixing or overdubbing scenario. They've also doubled the number of preamps, from two to four, and used the extra rear-panel space to accommodate 'proper' jack sockets for all of the line-level I/O, rather than using the fiddly and expensive D-sub format.

Although the BiG SiX has only just been announced, SSL were kind enough to send us a model in advance of its launch. Click here to read our exclusive first review!

Your Questions Answered
6 days 22 hours ago.