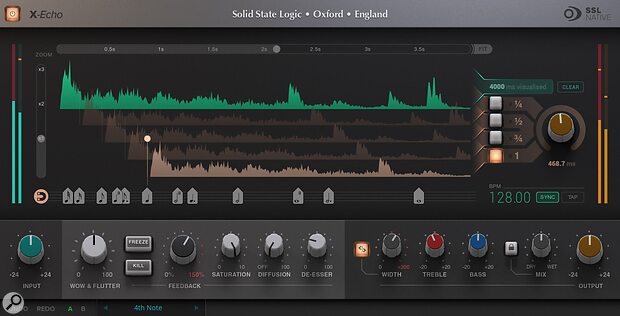 SSL's excellent X-series of plug-ins has just gained a new member. The X-Echo combines tape-style delay and reverb, and is said to offer the sound of “definitive early tape delay hardware of the 1960s”, specifically the Echoplex.

Rather than go for a skeuomorphic interface, though, they've opted for the modern approach, and it looks frankly rather more useful than a photorealistic GUI! At the centre of the plug-in window is a display that shows the waveforms of the four virtual tape heads, so that you can visualise both the timing and amplitude of each.

A Wow & Flutter control introduces the pitch modulations you'd expect from a mechanical delay unit, while Saturation adds progressively more distortion as you dial it up. The Feedback control goes up to 150 percent, allowing you to replicate dub-style self-oscillations, while buttons marked Freeze and Kill let you create infinite loops or rapid drops, respectively.

The reverb component of X-Echo is apparently an all-new algorithm, and its contribution is controlled using the Diffusion knob.

Usefully, X-Echo also includes a de-esser in the feedback loop, so that you can eliminate distracting repetitive sibilants. You can adjust the effect output's stereo width, tweak the tonality of the delays with treble and bass tone controls, and set your own preferred wet/dry mix. Naturally, you can also sync the delay tempo to that of your DAW project, or via a tap-tempo button, and the plug-in also features SSL's usual preset management and A/B switching.

SSL's new X-Echo reverb and delay plug-in is available now from the SSL eStore (see link below), and priced at £139 in the UK and $199 in the States. It's also included as part of the ever-growing SSL Complete bundle, which is priced from $14.99 per month. Naturally, we'll be bringing you a full review very soon!