The UK’s biggest synthesizer event returned to Sheffield on Saturday 7 October with a 30% higher attendance than last time. Now in its second year, SynthFest UK, organised by Sound On Sound magazine, is a celebration of all things synth, with an exhibition hosting manufacturers, retailers and universities, as well as a seminar programme with big names in the synth world and a Modular Meet where people could show off their own rigs.

All of the seminars this year were packed, with standing room only, and it’s easy to see why. The Human League and Heaven 17 founder Martyn Ware talked through his top synths; 'Deconstructing the Dr Who Theme' saw original members of the BBC Radiophonic Workshop go back to the source recordings and the VIP Roundtable Discussion saw Martyn Ware, Adrian Utley (Portishead), Will Gregory (Goldfrapp), synth performer/composer Hannah Peel and producer Steve Levine talking about everything synth-related.

Also, Tom Richards demoed a Mini-Oramics machine which uses Oramics — a form of drawn sound invented by Radiophonic Workshop co-founder Daphne Oram. And other subjects included a Modular Synths performance in Surround Sound and the mysterious Ondes Martenot electronic instrument from 1928, as heard on the original Star Trek theme. 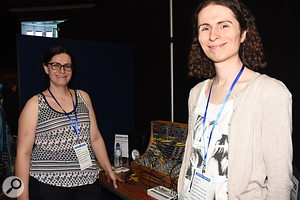 Nina Richards and Zoë Blade of Transistor Sounds Labs.The show housed over 40 exhibitors, including household names such as Akai, Ableton, Roland, Korg and Moog as well as boutique makers including AJH Synth and Rebel Technologies. SynthFest also welcomed several international manufacturers including 1010 Music, Bitwig, Tasty Chips, Modor and Radikal Technology. There were loads of products making their UK public debut at the show including the Modal Electronics CRAFTrhythm drum sequencer, the Moog Subsequent 37 and the iConnectivity PlayAUDIO12, which is a serious new tool for seamless switching between a main and backup machine for live playback of backing tracks. 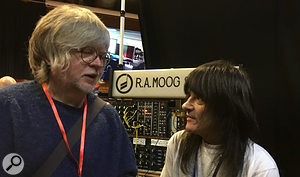 Will Gregory from Goldfrapp talks to Moog Modular owner and keyboardist Tom Szakaly at SynthFest UK 2017.One thing that really sets SynthFest UK apart from other trade shows was the presence of retailers who were selling the latest and greatest (and indeed older and awesome) gear. Rich Tone Music, Red Dog Music, Rubadub, KMR Audio and SoundGas were all selling synths at discount prices.

In addition, within the Modular Meet area, there was every conceivable Eurorack module on display, but one particular highlight was an incredible 1968 Moog Modular designed for Jazz In The Park — the event at which Robert Moog debuted the system — owned by synth expert and keyboardist Tom Szakaly.

Sound On Sound would like to thank the Audio Distribution Group for sponsoring the event by providing Dynaudio Pro monitors for the exhibitors and seminar room, plus a special thanks to all of the volunteers, exhibitors, speakers and staff for making SynthFest UK such a huge success. We look forward to returning next year to the Octagon in Sheffield on Saturday 6th October 2018 for an even bigger show!

SynthFest UK is a Sound On Sound event in partnership with Sheffield's Sensoria Festival of Music / Film / Digital Media http://www.sensoria.org.uk