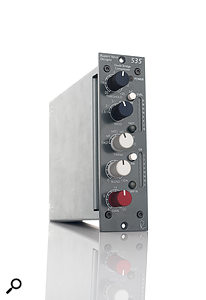 First produced back in 1969, Rupert Neve’s 2254 compressor provided a smooth, rich and characterful sound that immediately won it a legion of admirers. A fixture of Neve consoles for the next three decades, it remains revered and sought-after to this day. Now Rupert Neve Designs have created a 500-series module based on that classic diode bridge circuit but boasting many modern updates as well.

The 535 Diode Bridge Compressor module is based on the dynamics circuit found in the Shelford Channel, the channel strip RND released last year that was itself something of a Neve greatest hits collection. As on the Shelford Channel, the 535 module adds a wet/dry mix control and an advanced timing control, offering five attack time settings from fast to slow plus an auto mode. That’s in addition to the threshold (-25 to +20 dB), ratio (1.5:1 to 8:1) and gain (-6 to +20 dB) controls. Other features include level and gain‑reduction meters, a sidechain high-pass filter, stereo linking, a ‘fast’ limiting mode and a compressor in/out switch. Promising the larger-than-life qualities that made the 2254 so popular but with significantly lower noise, the Rupert Neve Designs 535 is available imminently, priced $1095 in the US, with UK pricing yet to be confirmed.