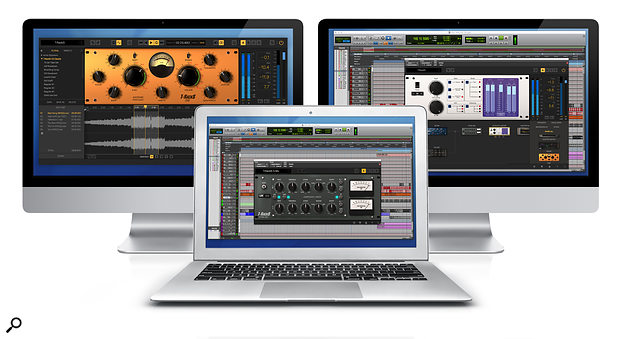 IK Multimedia are set to release T-RackS 5 — the latest iteration of their mixing and mastering system for Mac and PC — in October.

Since its creation in 1999, T-RackS has been a mainstay in professional productions. Now, T-RackS 5 upgrades IK's powerful mixing and mastering system with 4 all-new processors for a total of 38 modules on a flexible 16 processor series/parallel chain; it boasts a new audio engine that now supports audio up to 192kHz / 32 bit floating point, a broadcast-ready professional metering section, a redesigned, resizable interface as well as an album assembly section with multi-format export.

Perhaps the most intriguing of the new modules is the Master Match module — a new type of plug-in that automatically matches the sound of a mix with up to three other reference tracks using highly sophisticated algorithms. The aim with this module is to make it easy to create great sounding masters without the need for any previous audio engineering experience or specialised skills. We’re yet to hear how it performs, but it’s certainly a bold claim!

Also new in T-RackS 5 is Dyna-Mu, a vari-mu-style compressor based on an iconic American design; a 10-band parametric equaliser called EQual that pairs digital precision with analogue-emulated curves from highly-regarded hardware.

Then there’s the new ONE mastering processor designed as an all-in-one solution for easy audio finalisation. It sports an EQ, compressor, analogue harmonic exciter, low-end enhancer and limiter.

T-RackS 5 is flexible enough to fit into almost any digital audio production workflow. It can be used in standalone mode but can also be run as a plug-in suite. The latter mode offers nearly all the standalone mode features within the environment of a DAW. Finally, all T-RackS processors can also be used individually as plug-ins within a DAW.

In addition to supporting audio up to 192kHz/32-bit floating point, the new audio engine gives you four dithering options to choose from, and an internal resampling engine offers an additional layer of protection against inter-sample peaks and overshoots.

With the mastering tools within TrackS 5, it’s also now it's possible to assemble a full-length production directly within the software interface and create an album sequence with suitable track metadata including pauses, fades, track ID's, ISRC codes, CD-Text and more, then export single high quality master audio files or the whole project in various formats such as WAV, AIF and standard DDP image for replication or Wav Cue files.