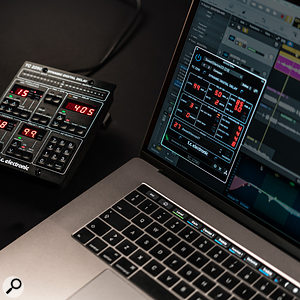 Introduced in 1985, TC Electronic’s 2290 Dynamic Digital Delay unit offered a range of features that were revolutionary for the time, including superior sound quality, up to 32 seconds of delay, sampling and looping, modulation and panning effects and, of course, its signature Dynamic Delay effect, a ducking delay particularly popular with guitarists. A staple of the studio and live stage, the 2290 remained in production for a remarkable 20 years. Now TC have created a plug-in version of this classic rack unit, complete with a dedicated hardware controller that recreates the look and feel of the original.

Even without this unique controller, which connects via USB and is powered by the USB bus, the TC2290-DT is no run-of-the-mill plug-in reissue or lazy software port. As TC themselves point out, a large portion of the 2290’s circuitry – and a big part of what made it sound so good – is not digital at all but analogue. These analogue elements and their interactions have been painstakingly emulated in the new plug-in. Even some of the digital elements had to be fully recreated by measuring and analysing multiple original units, as TC no longer had the original code! The result is billed as a complete and exacting recreation of the real thing, covering just as wide a range of effects, from stereo delay to chorus, flanging, tremolo and panning effects. The plug-in also features a range of signature presets taken directly from the original rack units used by a variety of artists and producers.

All of the front-panel controls have been shrunk down and rearranged to fit on the compact desktop USB controller, which also provides input and output level metering. All the signal processing happens inside the computer, however, so you can use the plug-in without it, run multiple instances simultaneously, sync to DAW tempo and use parameter automation. The VST, AU and AAX plug-in is compatible with macOS and Windows and the complete package is priced at £357$349.