Chaz Ginest is a guitar maker based in Denver, Colorado, who manufactures instruments under the name of Ten32 Guitars. His latest models have been in development since 2007, and are able to be disassembled into their component parts, all of which then fit in a case that’s small enough to be taken on a plane as hand luggage! 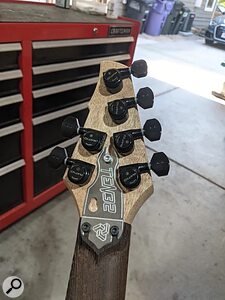 The guitars feature bolt-on necks and headstocks, which can both be removed for ease of transport. The new instruments aim to provide guitarists with a truly portable solution that can be easily transported and doesn’t compromise on quality or playability. The headstock and neck can both be removed, allowing the guitar to fit into a backpack-sized case which also contains all of the necessary tools for assembly and maintenance, as well as a selection of spare parts.

All of the removable parts use steel threaded fasteners, meaning that they can be taken apart and reconstructed repeatedly without any wear being introduced to the fixing points.

Three models of guitar are currently available, the EN, HT, and HSV, with LT and CG models coming soon. Each of the models offer a different body shape and style, which are then available in three different series.

Series 1 instruments are flattops, but include shaping such as belly cuts and forearm contours, Series 2 offers a carved top with a single contour, whilst Series 3 is also a carved top, and adds a second contour. A huge range of hardware, electronics, and finish options are available, with configuration forms provided on the Ten32 website.

The guitars also include a range of other innovative features, including modular nuts that allow users to choose between three different designs, and a ‘Trem Block Screw’ system which can be used to hold fully-floating tremolo systems in place during string changes, set the system’s ‘pull up range’ to a specific musical interval, or stop the system from moving entirely for enhanced tuning stability.

Chaz provides an overview of the cases in the video below, with parts two and three offering details on the guitar’s neck, headstock, and body designs.

Each of the five models are available in three different series, which are priced as follows:

All of the above prices include a case.