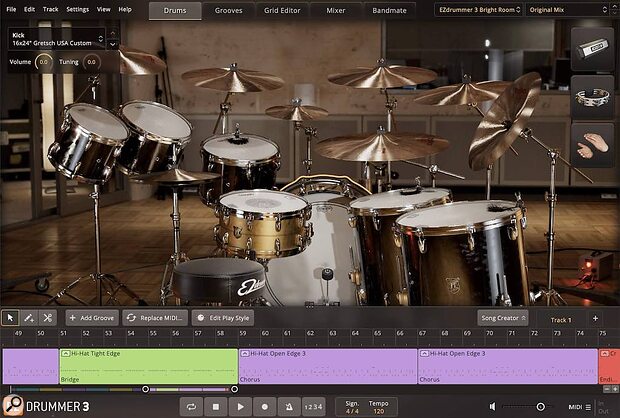 Toontrack have announced EZdrummer 3, the third version of their popular virtual instrument software. Set for release on May 3rd 2022, and featuring a new fully scalable and resizeable GUI, this update sees the software get a complete re-build and introduces some powerful new features, building upon the formula that has made its predecessor one of the top choices for producers and songwriters worldwide.

The updated VI comes with an all-new sound library featuring seven drum kits and extras captured by Grammy Award-winning producer/engineer/mixer Michael Ilbert (Coldplay, Adele, The Weeknd) at the world-famous Hansa Studios in Berlin. There is a new MIDI library packed with grooves covering all major music genres including pop, rock, electronic, hip-hop, reggae and many more, whilst an on-board grid editor allows programming, editing and fine tuning of MIDI information from within the plug-in itself. The mixer also benefits from a new and more intuitive interface, with a variety of presets delivering ready-made mixes for a wide range of styles and sounds.

Toontrack’s innovative Tap2Find feature has been updated to include a step sequencer and given the ability to record groove mockups, and users can now mix and match parts from different MIDI grooves to create new variations in an instant. Humanisation control provides automatic adjustment of velocity and timing, whilst articulations are also automatically varied, helping to create more expressive and natural sounding results from the outset. A new Bandmate feature allows users to drag an audio or MIDI part into the GUI (a guitar or keyboard riff for example) and EZdrummer will generate a custom groove to suit.

Toontrack are running an introductory offer allowing current users of EZdrummer 2 to pre‑order at a discounted upgrade price. New users are not being left out either, with anyone who purchases EZdrummer 2 between now and the release date being eligible to the upgrade to version 3 on release. Full pricing and details on the offers are available on the product page at Toontrack’s website, along with audio demos.