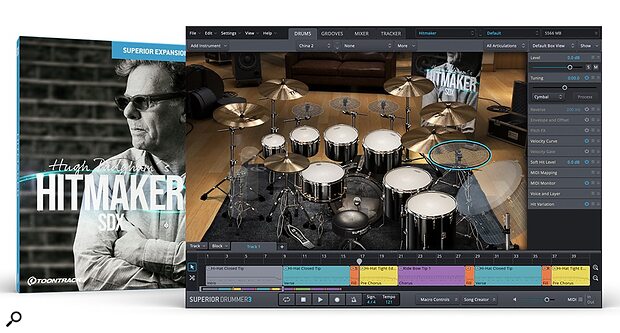 Hugh Padgham’s professional credits include working to create some of the most iconic songs by Phil Collins, Genesis, The Police, Sting, David Bowie, Paul McCartney and The Human League among many more. Having helped shape the sound of the era, even the invention of the quintessentially ‘80s gated snare drum sound is attributed to Hugh. He also produced The Police’s track ‘Every Breath You Take’, and you can find out more in our interview with Hugh for SOS Mar ’04.

In Hitmaker SDX, Hugh wanted to build an eclectic mix of acoustic and electronic drums inspired by the ‘80s and ‘90s. The sounds of six unique acoustic drum kits and a massive collection of vintage hardware have been recorded to tape in the British Grove Studios in London, making use of four legendary consoles. And rather than recorded directly, the drum machines have been played through a PA system in the same space as the acoustic drums and captured with a similar microphone setup.

This expansion includes a generous selection of presets made by Hugh Padgham, as well as a bespoke library of MIDI drum grooves and fills inspired by Padgham’s discography.