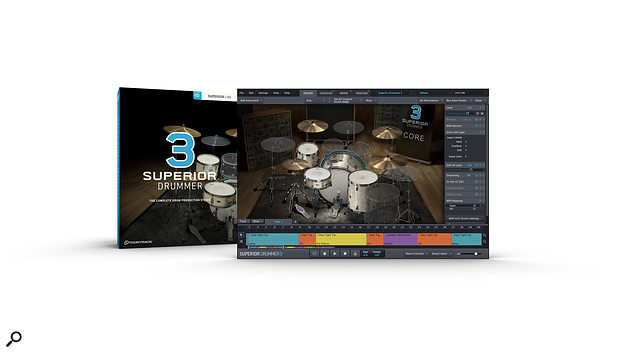 Toontrack have today announced a major update to their Superior Drummer software. The bigger brother of the hugely popular EZDrummer, Superior Drummer 3 not only provides a vast number of professionally recorded samples, but also provides advanced drum replacement/enhancements tools, electronic drum sounds and a built-in mixer for routing and processing the kits

Superior Drummer 3 boasts more than 230GB of raw material, recorded in 11.1 surround by industry legend George Massenburg at Galaxy Studios in Belgium — one of the world’s most quiet and ideal sampling locations. The core sound library features six kits (Ayotte, Gretsch, Pearl, Premier, Ludwig, Yamaha), plus additional snares, kick and cymbals, some of which feature additional tools such as brushes, rods and mallets. On top of that, there are 350 additional electronic drum samples for creative layering as well as drag-and-drop functionality for importing individual and third-party samples.

Toontrack have also developed a built-in, offline audio-to-MIDI conversion tool called Tracker which is based on an instrument recognition AI and is designed to make drum replacement and augmentation easy.

Beyond that, the integral mixer allows complex routing and offers 35 low-CPU plug-ins for processing your kits and a library of mix-ready presets if you want to get going quickly. Powerful macro controls also allow you to adjust various parameters from a single control within your DAW.

Superior Drummer 3 incorporates many of the popular features of EZDrummer 2. These include the Song Track which lets you build the groove for your entire song and Tap2Find which will match your tapped out beat with the closest pattern in the software’s groove library. You can also tweak your patterns and velocities using the built-in MIDI grid editor.

Superior Drummer 3 will be available as a download from 12th September and can be pre-ordered now from Time+Space and authorised dealers with an SRP of £287 / 329 Euro. Existing Superior Drummer 2 users can upgrade for £147 / 169 Euro. Existing EZdrummer 2 users can crossgrade for £217 / 249 Euro. An SSD unit containing the SD3 content will also be available as an optional extra.