It was with great regret that we learned yesterday of the death of Wowa Cwejman, the man behind Cwejman synthesizers and modules.

Originally from Poland, he emigrated to Sweden when he was just twenty years old and, although not as well known as many of our industry’s pioneers, he was hugely respected by all who knew his products. His passion for synthesizers began in 1971 when, while watching a TV broadcast of Emerson Lake & Palmer, Cwejman became smitten with the sounds of the Moog synthesizer. This led him to build his first instrument which, he once admitted to me, included modules of ‘variable quality’.

Unwilling to settle for anything but the highest standards, he persevered and was later commissioned to build a complete instrument that he named Synthra, but this never went into production because Cwejman believed that there was little future for analogue, subtractive synthesis once digital synths had started to appear. So he turned his back on the music industry and went to work as a consultant for companies such as Sweden’s communications giant, Eriksson. But when, in the late 1990s, analogue synthesis woke from its long sleep, the enthusiasm of his daughter’s boyfriend (who thought that it was ‘cool’ that his girlfriend’s father had built analogue synths in the 1970s) convinced Cwejman to develop a second instrument. This was the Analogue Workbench, which he began in 1998. Having completed this, he then decided to develop a commercially viable monosynth. Drawing upon twenty years of industrial experience to improve upon his earlier ideas, the result was the Cwejman S1, which looked and felt more like a product from an established manufacturer than the home project that it was. 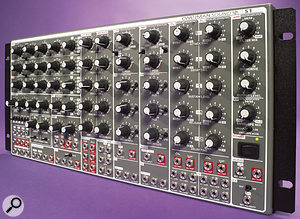 Cwejman Sound S1 MkII synthesizer.Photo: Mark EwingCwejman and his business partner Rüddi Porsgaard demonstrated the prototype to numerous musicians and many studios, and this convinced them that there was a market for the S1. Unfortunately, it took time to find subcontractors whose work met Cwejman’s exacting standards, so it was to be another year before the first batch of units were manufactured. Further enhancements were soon forthcoming and, in 2004, it was the S1 MkII that finally brought Cwejman’s name to a wider audience, quickly becoming an ‘aspirational’ product — one that still incites lust and the desire to spend large amounts of money among the cognoscenti of analogue synthesizers.

A proposed S2 (based upon the S1 MkII but with a simpler architecture and at a lower price) never appeared, but in 2006 various Eurorack modules followed, and these were all built to the same, exacting standards. Like the S1 MkII, they were not cheap, but they were widely recognised as ‘best in class’. However, this came at a price. It’s said that Cwejman calibrated every module himself before it could be packaged and shipped, so manufacturing never seemed to keep up with demand. On the other hand, this ensured the quality and exclusivity of the products.

Building synthesizers may not have been his full-time occupation, but it was something that Wowa Cwejman did exceedingly well. The industry has lost one of its lesser known but highly respected innovators.