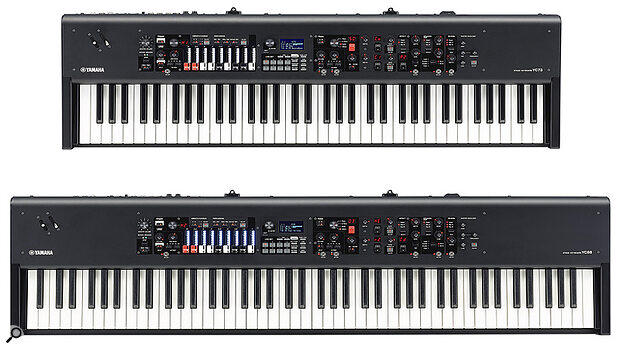 Yamaha's YC series has its roots in the 1970s, when those initials were applied to a range of combo organs that were highly desirable among gigging keyboardists of the time, and are now considered classics. In 2015, Yamaha revived the name for their compact Reface digital organ, and then followed that up with the YC61 [reviewed SOS September 2020], a more serious prospect for professional performers, and which boasted drawbars, emulations of a host of classic keyboard sounds, and a comprehensive effects section.

Today, the YC range gains two members — the YC73 and YC88 — which essentially transplant the YC61's engine into two even larger instruments. The YC73 features a 73-note keybed with weighted keys, and is intended for those who divide their time between playing organ- and piano-type sounds. The YC88, meanwhile, offers the response of an acoustic piano, and features 88 weighted, wooden, triple-sensor keys with synthetic ivory and ebony tops.

Like the YC61, the sounds in the newcomers are generated using Yamaha's proprietary Virtual Circuit Modelling technology, which allows them to emulate such sonic details as key clicks and tonewheel leakage, as well as powering emulations of rotary speakers, vibrato/chorus effects and more. But it's not just organs on offer: the new stage keyboards also contain a number of classic FM sounds from the Yamaha DX7, as well as acoustic and electric pianos, strings and brass, plus analogue-style synth sounds.

The Yamaha YC73 and YC88 are expected to become available later in January 2021, and will carry MSRPs of $2999 and $3499, respectively. Check out the video below to hear the new YC keyboards in action.