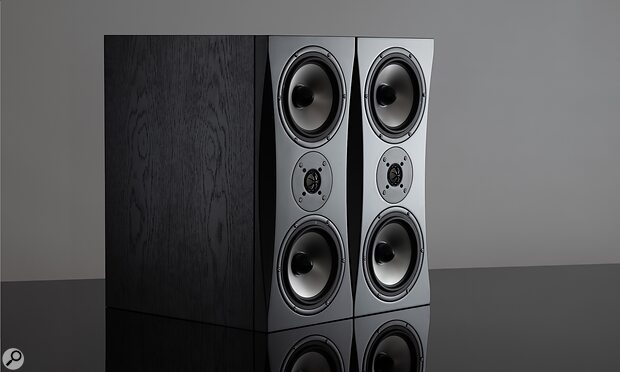 Bournemouth brand OS Acoustics have just sent us news of their latest studio monitor, the DBS8. It's only their second ever speaker, but we were mightily impressed with their debut DB7, so this new design certainly warrants further investigation.

Electro-acoustically, the DB7 was a fairly conventional two-way, reflex-loaded speaker. The new DBS8, in contrast, is a closed-box design and employs the less common mid-tweeter-mid (MTM), or D'Appolito, driver configuration. Such an arrangement carries numerous benefits over using a single large woofer, including reduced thermal compression, a narrowed vertical dispersion pattern (which helps reduce desk and ceiling reflections), improved off-axis frequency response, and less audible cone break-up. The woofers in this case are the same high-quality 6.5-inch SEAS units as were found on the original DB7.

Again like that previous speaker, the DBS8 uses a high-tech, ceramic-coated magnesium-dome tweeter from German company Eton. Rear-panel facilities are identical too, and include a stepped input gain control and a dial for selecting one of eight DSP operating modes. These allow you to engage flat or 'voiced' EQ modes (the latter being intended for less critical listening applications) or compensate for speaker placement, and — most significantly — to time-align the outputs from the woofers and tweeter, at the expense of a little latency.

The published specs for the DBS8 are impressive. The LF response is only 6dB down at 35Hz (and rolls off gently below that, thanks to the sealed-box loading), the phase response is within ±15 degrees from 200Hz upwards, and total harmonic distortion (for 90dB SPL, measured at 1 metre) remains below one percent above 75Hz.

The DBS8 is due to go on sale from 18th January, and will cost £4999 per pair, including VAT. We look forward to putting them through their paces in a future review!