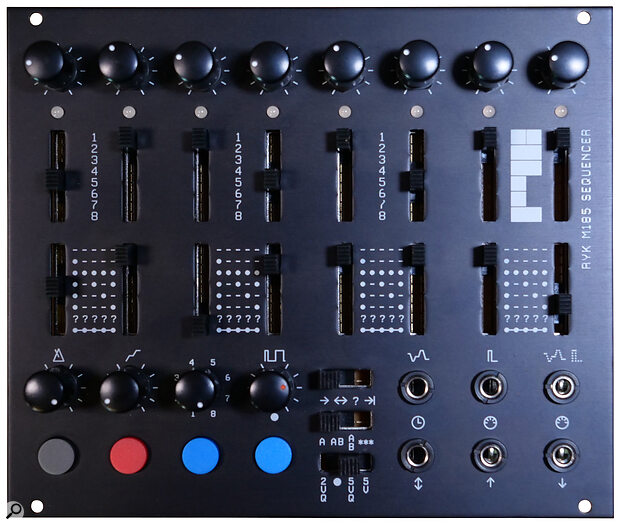 The M185 sequencer comes with a bit of story. In 2007 Jake from RYK Modular had a Roland System 100m modular system and found himself dissatisfied with the M‑182 sequencer and its incessant looping. So, he developed the M185 sequencer in the System 100m format to introduce rests, repeats and gate patterns to make the sequences more creative and playable. He released it in 2009 as a fully built and kit version and it drew the attention of a few Eurorack manufacturers. He sold a license to Intellijel who, in 2012, released the very well‑regarded Metropolis sequencer for Eurorack. Jake went back to his day job.

People have bugged him ever since to release a Eurorack kit version. After his day job dried up last year he discovered that Eurorack was now huge and it might be worth giving it another go. So, taking his original design he pushed it about a bit, expanded a few features and here we have a new and improved M185 sequencer for 2020.

The basic premise is that you’ve got eight notes, either free or quantised, set by the knobs. You can then shape, stretch and manipulate the sequence by fiddling with two slider switches that select how many repeats or pulses each note has and the way it’s gated. So to start with you’ve got eight notes looping round and you can turn each Stage (as they call them) on or off in what feels very much like a 303‑style sequencer. But as you introduce note repeats and gate patterns the sequence evolves into all sorts of interesting places. You can add in a bit of portamento and play with the gate length and you’ll find that the M185 transforms into a bit of an instrument.

As you play and manipulate the switches the length of the sequence becomes very elastic. It can feel deliciously unruly as you destroy a really solid 16‑pulse groove by introducing it to the 17th pulse and then pulling it back to 11 with the slide of a switch. This will inevitably cause a bit of trouble if you are making music in a looped environment alongside other sequencers or drum machines. Fortunately the M185 has a Fixed Sequence mode where the number of pulses remains constant regardless of the pulse settings on each Stage. It simply resets at a different point as you fiddle in order to maintain the loop. It’s a brilliantly engaging way to play with melody.

It can feel deliciously unruly as you destroy a really solid 16‑pulse groove by introducing it to the 17th pulse and then pulling it back to 11 with the slide of a switch.

Just when you’re having too much fun you discover that you can split the eight Stages into two sequences. You can run them in series and specify how many times each one repeats before moving to the other. So set up two four‑note sequences and repeat the first one seven times and the second one once as a roll or variation on the end. Or run two competing melodies ping‑ponging back and forth; there are so many possibilities.

Or you can run them in parallel giving you two independent sequences routed out to two VCOs. You can run the second sequence at a Clock division of the first and if you want you can route the CV of one into the other for some transposition. This becomes a whole other creative space working with two sequences running at different speeds and different lengths, related or unrelated and all the time subject to the elasticity of those pulse counts and gate patterns.

Round off the feature set with programmable portamento, gate length, MIDI sequencing, velocity programming and MIDI‑to‑CV conversion and you’ve got one impressive sequencer.

If you’ve not used this style of sequencer before, then it can be totally revolutionary in terms of what it does to your modular music-making. Often your focus can be in the sound design whereas the M185 pulls you into spending time with the melody, massaging rhythms and finding new movements. It can do everything from simple notes through TB‑303‑style basslines and on to complex interacting melodies. My only criticism is that the black sliders against a black front panel can be difficult to see, especially in a dimly lit live environment. But it’s a thoroughly enjoyable and playful sequencer and quite a bit cheaper than the Metropolis.