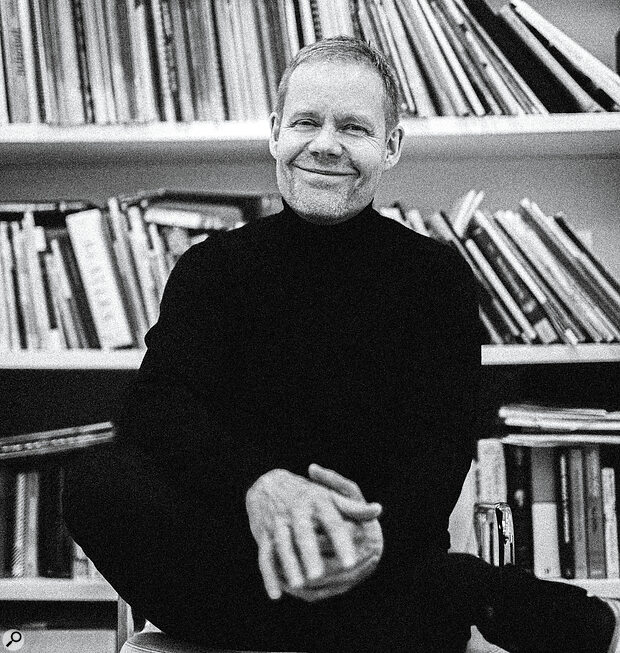 Blurring the boundaries between classical music and ambient electronica, Max Richter is one of the most prominent composers of his generation. As of now, he’s also a studio owner...

“It’s almost like an instrument,” says Max Richter of the newly built studio he shares with visual artist Yulia Mahr. Once an enormous agricultural building, Studio Richter Mahr is now home to separate workspaces for the two artists, plus a large recording facility for hire, with an impressive live room. With a minimalist aesthetic, natural light everywhere and an on‑site café supplied by its own kitchen garden, it’s a far cry from your typical recording studio. And this is entirely deliberate.

“Yulia and I have been thinking about doing something like this for about 20 years, one way or another. We’d been looking for an opportunity to build something that could house our enthusiasms and our work, and also offer some dimension of that to other people. It took us a long time to figure out how that could work and what it should be. Then we accidentally came across this empty shed, which was perfect for what we wanted and which we’ve upcycled. We kept the concrete slab and the frame, renewed the fabric of the building, took out the tractors and put the studios in. It’s quite a multidimensional space. 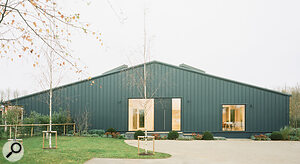 Studio Richter Mahr is housed in a former agricultural building.“In terms of the recording space and the music bit of it, it’s very much the outcome of me having spent years and years in other studios and, over time, realising what I liked about them and what I really didn’t like about them. They often feel a bit hostile to the organic creatures that inhabit them. They’re built around the needs of the machines. And we wanted something which felt more humane and more like a collaborative laboratory, something more free‑form, less structured. Because I think a lot of the way studios are tends to normalise the work that comes out of them. The way the systems are set up and the way the architecture and the building is tends to push you in a certain direction. And we didn’t want that. We wanted something which felt more open and creative.”

“One of the paradoxes of our current technological situation is that, for all the evolvedness of our tools, it is still often easier to compromise musical choices in order to accommodate the limitations of the equipment, and that is obviously unacceptable. That would mean you are adapting your vision to the limitations of the tools, but we want an environment where choices can remain wide open.

“I think sequencers, the traditional DAWs, definitely have that effect. They’re getting better, but it’s just so difficult to do certain kinds of things that people end up not doing them — things which are off the grid, for example. Conversely, other things are easy, for example repetition. Repetition has been in music forever. It’s in medieval music, it’s in classical music, so it is part of our expressive lexicon, but using repetition should be a creative decision, not just copy‑paste because copy‑paste is easy and hey! suddenly you’ve got more material. Just because it’s an easy thing to do for a computer, that doesn’t make it always the right aesthetic choice for a human being.

“My work occupies several spaces, really. It is rooted in composition, but straddles electronic music production. It is a hybrid language, and so the way the studio space is laid out reflects that. So, for example, when we got to talking about this writing room, the design team were like, ‘Well, Max’s writing room has to be completely acoustically dead.’ And I was like, ‘Well, no! I really don’t want to spend all my time in an acoustically dead room.’ I wanted just a really comfortable, nice place to be. And I really don’t care what it sounds like, within reason. In a sense, that’s quite a counterintuitive position, given you’re working with sound, but it’s more important to me that I feel good in the space. After all, I have a perfect listening environment in the mix room next door if I need it. So we made a lot of decisions like that: balancing the needs of wanting a fantastic, critical listening environment, but trying at the same time to make a place where you’d like to be.”

The first work of Max Richter’s that garnered widespread attention was his 2002 solo debut Memoryhouse. Described as an album of “documentary music”, it presented a fresh and powerful blend of classical minimalism, ambient electronica and spoken‑word material. Two years later, the composer cemented his reputation with The Blue Notebooks, while more recent highlights have included the eight‑and‑a‑half‑hour Sleep. Richter has also developed several ballets and written a suite for ringtones, his music has been widely used in film and TV, and he has scored numerous movies including the 2019 Brad Pitt sci‑fi extravaganza Ad Astra. A classically trained pianist, he is equally at home composing with pen and paper or by manipulating samples and found sound. “I’m trying to always do things I haven’t done before,” he insists. “That’s one of the nice things about doing music at all.

“Part of making a piece is to find new and really specific ways to tell stories. Sometimes a score will be conceived solely for orchestra, and that’s the whole palette, and I will be looking for new colours and different ways to work with the orchestra. But often the orchestra is only part of the story — in fact that is pretty much always the case with a film project. The first task then is actually making colours which I haven’t made before, which will be specific to the world of that film. So we will be making sample libraries or new instruments, or whatever, which is a fun process. The seed for that process is not arbitrary, but is in the material of the film itself, like in the case of Ad Astra.

Maz Richter: The story of Ad Astra is this guy goes from Earth to Neptune. And when I started thinking about the score for that, it occurred to me that the Voyager probes have made...