Back in SOS April 2014, I rather stuck the boot into Miley Cyrus’s ‘Wrecking Ball’. (So to speak.) Despite remaining unrepentant, I’ve always preferred positive examples to negative ones, so I’m delighted to report that I think Sia’s ‘Chandelier’ makes a much better job of this kind of modern power ballad. Yes, her chorus texture also features its own variant on the ‘consonant sludge’ I criticised in ‘Wrecking Ball’, but crucially it remains hard-edged and present-sounding right to the end, without syrupy additional string layers blanding it out — the drums stay right up front, the bass/synth combination keeps its bite, and the oscillating-thirds keyboard figure (almost a mini hook) remains clearly audible. Furthermore, 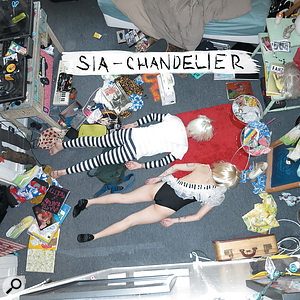 Sia’s vocal is less full-sounding and placed further back in the mix, with the result that it better supports the backing track’s illusion of power — it’s perhaps no surprise to learn that the engineer here is Manny Marroquin, whose mix of Rihanna’s ‘Umbrella’ I’d already held up as a role model (albeit in a rather different style) back in my ‘Wrecking Ball’ critique. On top of that, though, Sia’s beautifully fractured vocal tone throughout (most affecting on “fly like a bird through the night/feel my tears as they dry”) delivers real passion and emotional maturity that goes well beyond formulaic pop-diva posturing, so fundamentally I buy into what she’s singing about, where Miley Cyrus didn’t allow me to suspend disbelief. Sia, the hairs on the back of my neck salute you! Mike Senior

Without a doubt, this month’s coveted Mix Review rosette for Snare Hit Of The Month belongs to the splendid opening flam at 0:26 in this single from newcomers Royal Blood. The song also happens to be one of the most exciting new rock productions I’ve heard in a very long while: messy enough to have serious garage credentials (check out the ‘so broken it’s brilliant’ solo tone at 2:13-2:35), massively muscular and disciplined when it comes to riffing out in the choruses, chock-full of fantastic pop-sensibility drops/fills (eg. 0:25, 1:19-22, 1:30, 1:43 and 2:06-12, just to cherry-pick my favourites), and finishing with a storming double-time mosh-out from 2:25. I spend a lot of time in this column talking about the finer points of mix balance, but what’s brilliant about this production is that it transcends those kinds of concerns. So what that you’ll struggle to interpret the lyrics on multiple occasions? So what that the verse guitars sound a bit washy and distant at times? So what that the snare sounds like someone hitting a home run with a basketball once the real riffing kicks in, or that the hi-hats get a bit abrasive by the end? Frankly this mix demonstrates how little of that matters when the combined result’s got enough attitude to incite a nosebleed. 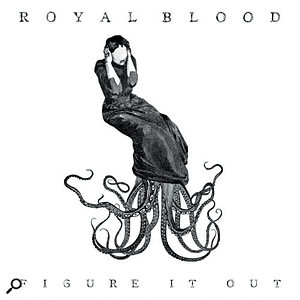 Mind you, I don’t want to imply that there isn’t plenty of good mixing going on here. The opening guitar tone (or is it just bass, given that there’s officially no guitarist in the band?) is very smartly designed, for instance, with a frequency suckout around 1.5kHz that’s perfectly adapted to accept the reamped lead vocal’s nasal-sounding peak in that part of the spectrum. This initial timbre also has precious little energy above 4kHz, leaving plenty of room in the mix for the vocal high frequencies initially, and then for the background rhythmic bed of hi-hat and shaker following the drum entry. And, despite the apparent simplicity of the riffing, there’s clearly some careful rebalancing of different guitar/bass layers going on to help the long-term mix dynamics between different song sections: if you directly compare the verse riff at the opening of the song with its reappearance after the first drum’s entry (0:26) and again after the first chorus (1:23), you’ll hear that each time it gets harder-edged, with more of a tracked-up sound in evidence.

The mono compatibility of this mix is also excellent, by virtue of a fairly restrained stereo image, and having heard it a couple of times now on BBC Radio 1, I can vouch that it translates extremely well via heavy broadcast compression on a mass-market single-speaker radio! The only question mark for me as far as the mono playback is concerned is the solo (2:13-2:35), where the lead instrument gets considerably wider and therefore sounds a bit distant on the single speaker. That said, this doesn’t make nonsense of the music by any means, given that the solo line remains perfectly audible against the drums-only backing at that point, and the upside of the lower solo level is that the dynamic shift into the full rhythm-section sound at 2:35 becomes more dramatic. Altogether a first-class piece of work, as far as I’m concerned. Mike Senior

‘Meanwhile Back At Mama’s’

I’ll admit that I find myself drawn to this kind of mainstream country production with a kind of morbid fascination, gawking at the unholy perfection of the Nashville machine in the same way I find it difficult to wrench my gaze away from aging stars who’ve had too many facelifts. As a singer myself, it’s the vocal tuning that appals me most. Although rocket-powered ‘Melodyning’ doesn’t fuss me as much with uptempo productions where rhythm parts play a greater role, in this case it seems such a waste that such an intimate song appears to have had so much of the natural emotion steamrollered out of it on corrective grounds. Honestly, you don’t need to nail down every millisecond of every vocal syllable to the grid to make a performance sound in tune. It’s just not necessary — and I say that as someone who’s spent plenty of time retuning vocals myself, not least for our Mix Rescue column! It’s pitch correctness gone mad, I’m telling you... 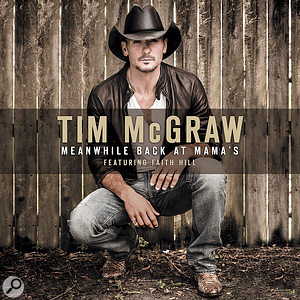 Anyhow, now I’ve got that off my chest, let me also point out a separate panning issue, namely that the main acoustic rhythm guitar is panned all the way over to the right of the panorama, and rarely is it counterbalanced by anything comparable on the other side. This is something that I’d instinctively tend to avoid when targeting a mainstream audience these days, because it opens up the risk that some of your listeners may hear an unexpectedly different mix in situations where they’re listening one-sided. Before you scoff at this concern, ask yourself how often you’ve seen people sharing earbuds, and also how often you see people listening on one earbud so they can listen to their music collection while holding a conversation with their friends — I saw fully a third of the occupants of my train carriage doing that the other day! As such, it’s educational to listen through to each of the channels of this song separately, and ask yourself whether the music still works properly one-sided.

To my mind, the lack of the instrumental hook in the left channel during the song’s first eight bars feels like a bit of a misjudgment in this respect, and the middle-section at 2:05-2:27 also seems to make substantially less sense musically in the left channel without the slide guitar interjections at 2:11 and 2:22. Other than that, though, the two mixes actually work rather nicely as alternative visions, almost as remixes — the left-channel version has more expansive with greater long-term ebb and flow in the arrangement, whereas the right-channel balance has more rhythmic drive. Mike Senior

Lecrae has been instrumental in bringing Christian hip-hop into the mainstream, with this single not only topping Billboard’s Christian and Gospel charts, but also helping propel his album Anomaly to the top of the US album charts into the bargain. From a production angle, I love how the bass part, which first arrives at 0:13 already sounds warm and rich, and has a nice sense of stereo width, but still leaves space for the earth-shaking sub-bass line which enters four bars later — beautifully judged so that it’s just on the right side of overstated, and closely controlled for dynamic evenness. The stereo width is also kept impressively wide by virtue of various incidental parts that trade heavily on their stereo Sides component to generate a strong ‘beyond the speakers’ illusion: the stereo phaser effect on the introductory guitar riff; the eighth-note keyboard ostinato first heard at 0:14; and various incidental SFX hits such as those at 0:13 and 0:25. 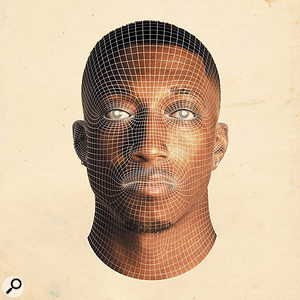 But my favourite aspect of this track is the arrangement of the main “all I need is you” sung vocal hook, which strategically drops its final word (frequently in tandem with the beat’s kick downbeat) from time to time for dramatic effect. The great thing about this is how it’s often used to draw attention back onto the lead vocal, which supplies the missing “you” as a part of the rapped lyric, for example with “you digging me” at 0:32 and “you ain’t got to question my allegiance” at 0:44; Other times it’s the backing vocals that fill in the blank (eg. “you all I ever needed” at 1:08), whereas at other times it’s simply left unresolved (eg. 0:56). Then when “all I need is...” is followed with “unconditional love” at 1:20 it feels like it’s adding an extra little subtext to the main lyric, and when the lead and double-track vocals rap along with the hook at 1:31 the final word is nicely emphasised by the change in texture as the female line drops out. And the icing on the cake for me is when the “you” hook tail, which has so often been muted, is then looped to signal the close of the second verse at 2:00 and to embellish the more stripped-back arrangement of the middle-section at 2:27-2:52. That’s what I call making the most of your material! Mike Senior

Given its enormous sales, this is a surprisingly curious-sounding production. To paint it in the most positive light, it’s certainly very efficient, in that everything you need to know about the song can be heard loud and clear through the window from next door’s portable radio! As a hi-fi listening experience, though, it’s pretty unpleasant in all honesty — it sounds like someone at the mastering house accidentally knocked the 3kHz slider of their graphic EQ, lending the overall mix tonality that peculiarly wearing ’70s tinniness that I associate strongly with threadbare daytime TV repeats, 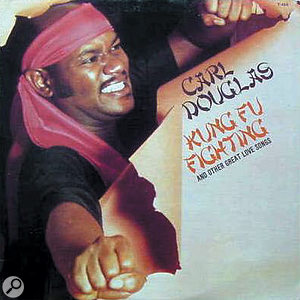 as well as making the high-frequency snare/kick transients and vocal sibilance extremely fatiguing on the ear. The thing about 3kHz is that boosting it tends to make any instrument sound more exciting and upfront, and that’s why EQ’ing individual tracks in solo mode is so risky — there’s a strong temptation just to hammer that region across the board! Whether the engineer of this particular mix fell victim to that pitfall is anyone’s guess, but suffice to say that if any mix of mine ended up as 3kHz-heavy as ‘Kung Fu Fighting’, I’d consider that more than just “a little bit frightening”! Mike Senior