Although I find the repetitive nature of this track rather wearing, that cloud's silver lining is that it provides plenty of opportunities to dissect the production using phase‑cancellation techniques. For example, import this song twice into a fresh DAW project, delay one of the tracks by exactly four bars (264,600 samples in this case) and polarity‑invert it. Mixing the two tracks together will cancel the repeating four‑bar drum loop out of the mix, allowing you to hear the intricacies of the bass playing without interference from the kick part, and unmasking the lead vocal's high‑frequency character and subtle tempo-sync'ed delay from behind the hi‑hat.

But that's just the start. Cancelling the second chorus (1:13) with the first (0:25) reveals that it's been copied and pasted en masse, while cancelling the third chorus (2:01) with the second shows that the only new addition is some extra backing vocals — which can be auditioned in isolation if you'd like to focus on the internal ornaments and passing notes of the arrangement in detail. Cancelling the fourth chorus (2:25) with the third informs us that Pharrell dropped in just the first line of his lead vocal for a bit of variation — a rather meagre concession, if you ask me, given that we're hearing the same lead vocal take for the fourth time by this point. At least he bothered to get off his arse and re‑sing the fifth and sixth choruses! 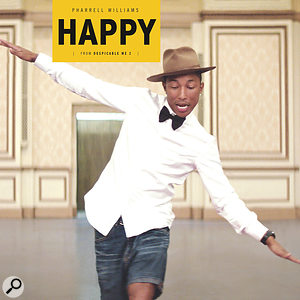 The second and third breakdown sections (1:49 and 2:49) are pretty much straight copy-and-paste jobs from the first (1:37), with the exception of the added "happy, happy, happy, happy” vocal embellishment, so once again, you can have a good listen to the way those vocal layers are progressively built up during the eight bars by cancelling the second breakdown with the first. Doing so also highlights that the vibrato on those parts seems unnaturally fast. Perhaps the track's tempo was rejigged after those parts were recorded? That might also explain why there's so much repetition — it might just have been the easiest way to pad out the song's duration to suit a faster tempo. Mike Senior

'Turn Down For What'

This is a tremendously clipped mastering job, with flat‑top sections on each kick hit that exceed 150 samples in duration, followed roughly 200ms later by per‑cycle overloads on the bass waveform, as the kick‑triggered compression releases. Despite the opprobrium meted out to such loudness-maximisation tactics in more acoustic styles, I have nothing against them here, because the digital distortion artifacts don't sound at all out of place in such an aggressive electronic style, and all the track's other musical elements are generally balanced well below the clipping threshold, so they come through cleanly enough. Assuming that the desired loudness was non‑negotiable, I think you'd have done more damage to this music by using a peak limiter than with clipping. In particular, you'd have softened the kick's timbre, as well as pulling it down subjectively in the balance.

As far as the programming is concerned, I'm impressed by how much value DJ Snake manages to get out of the single "urr” vocal sample if it is, as I suspect, used as the basis for the entire initial lead‑riff section (0:19‑0:57). For a start, by adopting the classic playback‑speed method of pitch‑mapping, he immediately introduces a nice contrast between the heavily 'chipmunked' timbre with truncated note durations at 0:19, and the more languid, human‑sounding legato when the pitches move down the octave at 0:29. I'll admit to a certain feeling of nostalgia for this kind of pitch‑shifting, which seems to have fallen a bit out of favour now that most music‑making software seems to default to formant‑corrected processing, because I think it still offers a good deal of expressive potential for the creative programmer. 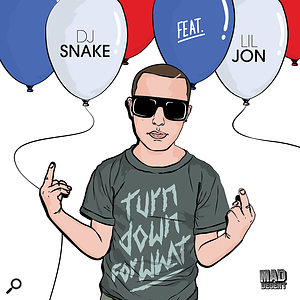 I also like the way DJ Snake has set up a fast portamento (ie. those little pitch‑slides at the starts of notes) to add more character and individuality to each of the note onsets — something that feels particularly effective here, almost like a natural extension of the inherent pitch waverings within the sample itself. Specifically, I'm pretty sure what we're hearing here is a retriggered monophonic sample program (ie. each new MIDI note always retriggers the sample afresh, and the sample is never allowed to overlay on itself) with portamento set to occur only between MIDI notes that are overlapped. To illustrate the programming possibilities this affords, put the first iteration of that seven‑note riff (0:19‑0:21) under the microscope — if you slow down the playback rate of the whole track it'll help you hear it more clearly. The second, fourth, and fifth notes of the riff have no portamento at all, but the third, sixth and seventh notes all slide in different ways (four semitones downwards, one semitone upwards, and eight semitones downwards respectively), by virtue of the previous MIDI notes they're overlapping with. In addition, there's also the pronounced downwards pitch‑slide at the beginning of the first note, presumably generated by putting in a higher‑pitched ghost MIDI note a fraction of a second prior to it, but with such a low velocity value that it's effectively inaudible in its own right.

What's great about achieving pitch modulation with portamento is that you can then layer MIDI Pitch-bend data on top if you like, as seems to have been done here with the fall‑off at the end of the second main riff section at 1:54. Don't forget, too, that many synths will let you automate (or modulate over MIDI) their portamento time parameter, which gives you additional pitch‑envelope nuances to play with. Mike Senior

You frequently hear dance‑music producers talking about setting their compressors to match the tempo of the track. The idea is to refine the release characteristics of a master‑buss compressor's gain reduction so that its gain pumping supports the groove. Take the four‑to‑the‑floor house kick‑drum cliché: if the compressor releases too fast, it'll tend to make the off‑beats between the kicks feel like they're rushing rather than rolling along smoothly, but if the release is too slow, the gain reduction never resets enough, weakening the rhythmic drive of the gain‑pumping effect itself. But it's not just in dance music where the rhythmic facet of compression is relevant, because I think this latest John Legend hit relies on it too. Assuming, for the sake of discussion, that quarter notes are at around 125bpm, the piano compression is creating a little eighth‑note 'bump' following each chord, and this seems to add a distinct sense of rhythmic urgency to what's otherwise rather a pedestrian part. It's a subtle trick, but one that's well worth remembering. 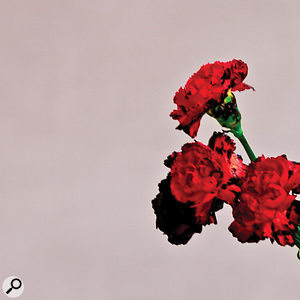 While we're on the subject of sneakiness, I reckon there are sly little synth pads lurking all over this production. I'm not just referring to the ones at the end of the track, such as the sparse hook section at 2:55‑3:09, where they're fairly audible; I swear I can hear little hints of them deep undercover behind the piano and vocals right from the first verse. It's almost feels like Legend's line is being doubled at the octave by a string synth, but that the synth is being carefully dropped out whenever the singing stops. For instance, is that a spare bit of 'D'‑flat synth tail after the word "head” at 0:17, where Legend drops to 'C' and then 'A' flat for "spinning”?

The Auto‑Tuned harmonies are an intriguing aesthetic choice. I thought over-use of this idea had irrevocably devalued it to the status of cheap gimmick (yes, Will.I.Am, I mean you!), but in this case the processing has a rare resonance with the song's lyrics. On the one hand, the hook line "all of me” seems to be underlined by the cloned harmonies; and on the other the word play of "perfect imperfections” chimes rather neatly with the fact that those harmonies are both perfectly in tune and also wearing the imperfection of their heavy processing artifacts with pride — especially by the time we get to 3:26‑4:11. I can only hope that I don't have to wait another 15 years to hear the next worthwhile abuse of Auto‑Tune... Mike Senior

Upon reading SOS May 2006's Classic Tracks feature, I was gratified to discover that the instantly recognisable recorded sound of Mark Knopfler's static‑wah guitar on this production was serendipitous. "I remember... heading out into the room to move the mics around,” recalls engineer and co‑producer Neil Dorfsman, "and Mark's guitar tech Ron Eve getting on the talkback and telling me not to touch anything because it sounded amazing as it was. One mic was pointing down at the floor, another was not quite on the speaker, another was somewhere else, and it wasn't how I would want to set things up — it was probably just left from the night before, when I'd been preparing things for the next day and had not really finished the setup.” It's a salient reminder of the power of the happy accident, and encourages us all to avoid getting too wedded to our 'standard' recording techniques. 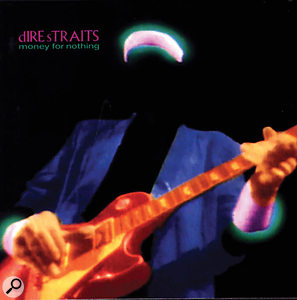 However, I suspect this anecdote also demonstrates the simple wow factor of stereo width. Examining the waveforms of the solo guitar intro (1:36‑1:49), you can see a clear time offset between the left and right channels, which naturally generates a Haas Effect-based image‑width enhancement. Counteract this widening effect with a short left‑channel delay (8.88ms by my reckoning) and the guitar immediately becomes rather more mundane. This inter-channel time offset also plays havoc with the guitar in mono, where it really takes a dive in the balance compared with the keyboards — with the result that the production sounds a whole lot less 'rock' and more 'synth pop' on single‑speaker playback devices. It's also interesting to speculate where that third microphone was, because it sounds like there's a bit of a slapback delay going on just in the right channel. Given that the delay time feels something like 40ms, I'd guess that this might be the third mic we're hearing, perhaps one of the stereo room mics left open by mistake on the other side of the room, judging by the setup diagram in that Classic Tracks feature.

Speaking of the drums, the panning of the toms has me scratching my head, but not because they're positioned off to each side of the panorama, putting them miles away from the hi‑hat. Super‑wide 'Hey, it's stereo!' toms were all the rage in the '80s, after all. What puzzles me is why the lower toms are on the same side as the hat, given that few drummers would set up their kit that way. Answers on a postcard, please...

Sting's cameo backing harmony is worth a bit of scrutiny. These days it's pretty common to edit backing vocals so tightly that they're more like backing shadows — supporting, but always subservient to, the lead. Here, however, the backing vocalist was an equally big star in his own right, and one of the most recognisable singers of his generation, so this approach would patently have been counter-productive. The decision to drop the lead vocal and feature only the harmony for most of the second chorus, which most popular songwriters would consider borderline insane, becomes a canny commercial move! Similarly, the increasing deviation between the two vocal lines as the song progresses (such as from 4:19‑4:24) continues to appeal strongly to both fanbases. That said, the cross‑promotional biscuit is most thoroughly taken by Sting pilfering the tune of his own song 'Don't Stand So Close To Me' (one of the Police's biggest hits) for 'I want my MTV'. Kerching! Mike Senior